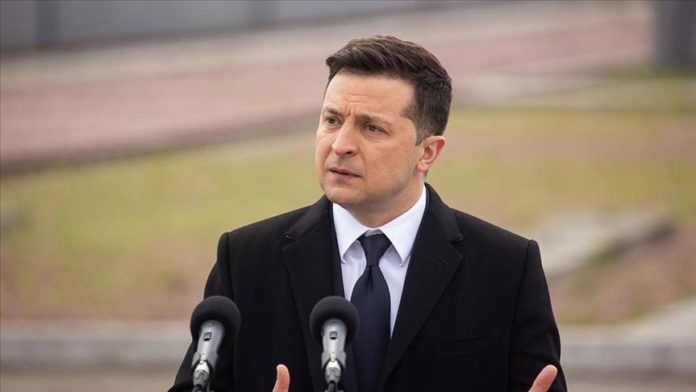 Russia must confirm the “absence of intentions to attack” Ukraine and its readiness to negotiate by “taking concrete steps” for peace, the Ukrainian president said.

Speaking to reporters on Friday evening in the capital Kyiv, Volodymyr Zelensky underlined that dialogue between the two countries could begin “at least with the issue of release of detainees.”

“Does anyone enjoy the fact that people are in prison? What’s the point?” he questioned.

He stressed that if Russia has any issues with Ukraine, it would be necessary “to meet and talk, and not to bring troops to the Ukrainian borders and intimidate ordinary citizens,” said a statement by the President’s Office.

“I am willing to meet and I’m not afraid of any format. Bilateral format … I am ready for any format,” he said.

Zelensky emphasized that as Ukraine’s leader, it is his duty to knock on all doors, appeal to all world leaders, and propose different formats and platforms to “return peace” to Ukraine.

The president mentioned that he would like the US, in particular, to join the negotiation process for calming down tensions.

“I would like President (Joe) Biden to be able to do that so that we have a negotiating platform in the US-Ukraine-Russia format,” he said, adding that this could take place in parallel with the Normandy negotiation process.

“Every time, I propose certain steps from our state. And I believe that President Biden can help us,” he noted.

Zelensky also called on business representatives of partner countries to “actively invest” in Ukraine to provide essential support to the country’s economy, adding any signals of support from partners were important for Ukraine.

“Such signals are more important when investments from one or another state come to Ukraine. The question is not in the volume. If a business wants to protect our state and believes in its stability and stands shoulder to shoulder, wants to be a friendly, powerful partner, then you are welcome,” he said.

He went on to say that in the current situation, the focus would not be on obtaining quick returns on investments, but to have Ukraine as a “reliable” partner.

Zelensky also asked people not to panic about a possible war with Russia.

“In the UK, Germany, France, and Lithuania, the press gives the impression that there is a war (in Ukraine). But that’s not the case. We don’t need this panic,” he said.

He stressed that if a war does break out with Russia, no country would send its army to defend Ukraine.

“Which country’s army is ready to protect us if there is a war? This will not happen. This is very frightening for NATO. NATO will have to defend Ukraine if Ukraine joins the alliance. These are very serious challenges for NATO. Some European countries are not ready to take risks by including Ukraine in NATO. But if all-out war starts now, it will be on the borders of some NATO countries,” he said.

Noting that it is not possible to say clearly whether there will be a war or not, Zelensky said: “There may be a war. If there will be a full-scale war, then it will not be a war only with Ukraine or only on the territory of our state. It will be a hybrid war involving information and cyber-attacks.”

He pointed out that Ukraine is preparing “in every possible way” for such a scenario.

“I believe that a quiet military preparation and diplomacy should be applied,” he said.

Zelensky noted that the conflict that broke out in 2014 would not happen again under a potential Russian attack.

“First, we didn’t have an army (then) as we have now. Secondly, people’s approach was different back then, everyone is extremely patriotic now. Everyone sees what is happening in the temporarily occupied lands and everyone knows that we do not want this,” he said.​​​​​​​