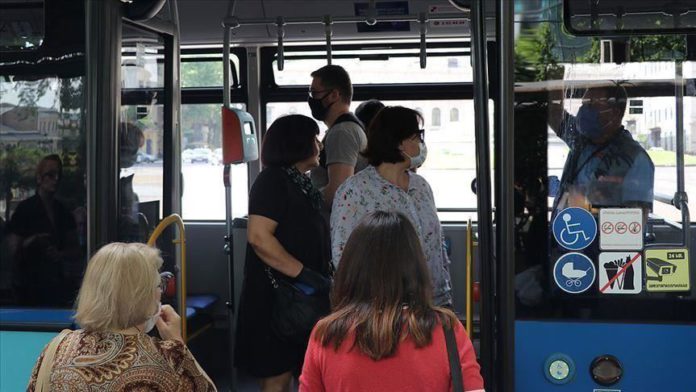 Ukrainian Health Minister Maksym Stepanov announced his country registered the highest single-day spike in coronavirus cases as 5,804 more people tested positive for the virus over the past 24 hours, bringing the total count to 250,538.

Over 56,000 tests have been conducted in the country since Thursday, he added.

Reminding that a similar situation was experienced in Spain and Italy in the spring season, Stepanov emphasized that even the health system of European countries could not afford such an increase.

The Georgian Prime Minister’s Office in a statement said that the registered number of cases in the country neared 10,800 as 527 more people tested positive for the virus.

A total of 313 people have recovered from the virus in the country, bringing the total recoveries to 5,866.

Some six new fatalities were reported in Georgia over the past day, with death toll reaching 72, the statement added.

Uzbekistan’s Health Ministry reported 207 more virus cases over the past day, bringing the total to 60,233.

At least 2,760 patients remain in hospitals in Uzbekistan.

In Kazakhstan, according to the Health Ministry, the overall count of infections rose to 108,561, while recoveries reached 103,758.

In the Central Asian country, 1,759 virus-related deaths have been recorded so far, including three fatalities during the past 24 hours.

The treatment of 3,044 patients, including 74 children, continues in the country, while 84 patients are considered to be in severe health condition, and 13 people are considered critical.

The coronavirus pandemic has claimed over 1.06 million lives in 188 countries and regions since it originated in China last December.

The US, India, Brazil, and Russia are currently the worst-hit countries in the world.

Over 36.57 million COVID-19 cases have been reported worldwide, with recoveries exceeding 25.48 million, according to figures compiled by the US’ Johns Hopkins University.