TurkishPress
Home News Ukraine cannot tolerate war, which should be thing of the past: Turkish... 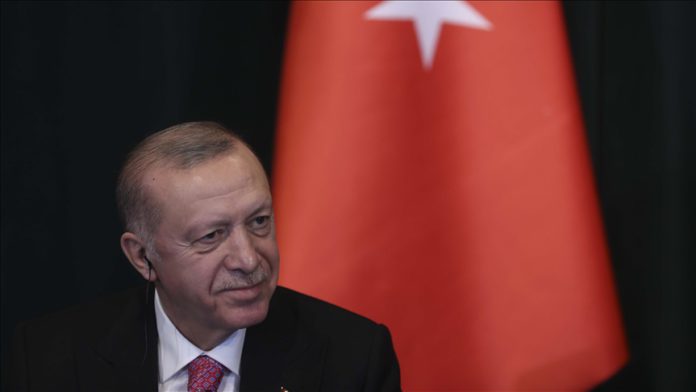 With the prospect of conflict in Ukraine not “tolerable,” wars should become a thing of the past, said the Turkish president on Tuesday, speaking on Ukraine’s current tense standoff with Russia.

“A Russian invasion of Ukraine is not a realistic approach,” Recep Tayyip Erdogan told journalists on his way back from a visit to Albania.

Erdogan said that Ukraine is no ordinary country but it is a strong one, adding that before taking action on Ukraine, “Russia should review its situation as well as the situation around the world.”

Pointing to the need to discuss the situation with Russian President Vladimir Putin, Erdogan stressed, “These regions can no longer tolerate war. It wouldn’t be right. We have to erase war from the history of politics.”

Amid the Russian military buildup on Ukraine’s borders, and Western countries threatening sanctions in case of military action, Turkiye is in a unique position, as it enjoys friendly relations with both Moscow and Kyiv.

Erdogan said that Turkiye’s policy on a possible invasion is clear, as can be seen in its position on Russian-occupied Crimea.

Russian forces entered the Crimean Peninsula in February 2014, with Putin formally making the region part of the Russian Federation.

Turkiye and the US, as well as the UN General Assembly, view the annexation as illegal.

Turning to issues closer to home, Erdogan commented on the withdrawal of US support from the EastMed gas pipeline – which Turkiye is not a partner to – saying that Washington was just bowing to the reality of the situation.

The US decision was a purely economic one, as it saw “nothing will come” from the project, he said.

“This project couldn’t be done without Turkiye. Because if gas is going to go to Europe from here, it can only happen through Turkiye,” Erdogan said.

The Israeli energy minister once proposed Turkiye join the pipeline project, and even now, “terms could be discussed,” said Erdogan, stressing that only with Turkish involvement is such a pipeline feasible.

Erdogan also pointed to some progress in Turkiye’s long-troubled relations with Israel, saying that he has been speaking with his Israeli counterpart Isaac Herzog.

“Israeli Prime Minister (Naftali) Bennett sends news on a different level. As you know, I recently received members of the Rabbinical Alliance of Islamic Countries at the (Turkish) presidential complex, and we had meetings with them,” he said.

“If we’re going to do politics, politics is not a fight. We have to take politics through the line of peace,” he added.

The US on Jan. 11 formally withdrew its support for the EastMed, with the US Embassy in Athens saying Washington is “shifting our focus to electricity interconnectors that can support both gas and renewable energy sources.”

In 2020 Greece, Israel, and the Greek Cypriot administration inked an agreement to build a 1,900-kilometer (1,200-mile) natural gas pipeline in the Eastern Mediterranean (EastMed).

Many experts said the estimated natural gas transfer cost would be three times cheaper if the pipeline goes through Turkiye instead.

Though Ankara and Tel Aviv have expressed a willingness to negotiate on such a gas transfer via Turkiye, talks have never gotten off the ground.

Sudan to withdraw all forces from Yemen: PM