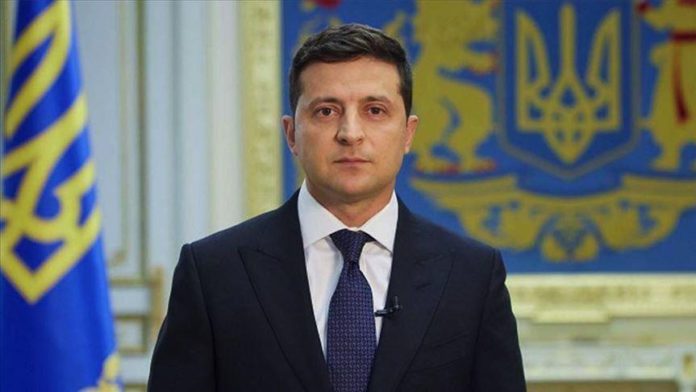 In a tweet on Wednesday, Zelensky said the broadcast of three TV channels — 112 Ukraine and its regional branches, ZIK, NewsOne, and a media holding Novosti — was suspended for five years because they have Russian funding.

“Sanctions is a difficult decision. Ukraine strongly supports freedom of speech, not propaganda financed by the aggressor country that undermines Ukraine on its way to EU and Euro-Atlantic integration. Fight for independence is fight in the information war for truth and European values,” Zelensky said.

Sanctions is a difficult decision. #Ukraine strongly supports #FreedomOfSpeech. Not propaganda financed by the aggressor country that undermines Ukraine on its way to #EU & EuroAtlantic integration.Fight for independence is fight in the information war for truth & European values

On Tuesday, a statement from the Ukrainian President’s Office said the National Security and Defense Committee approved the decision to impose sanctions on Taras Kozak, a member of the Ukrainian parliament, and television channels owned by him.

Zelensky’s spokeswoman Yulia Mendel noted: “It has been confirmed that the financing of the channels is carried out by Russia, and the channels are used as a tool in the war against Ukraine.”

In a separate statement, MP Vadim Rabinovich announced that the Opposition Platform-For Life, a pro-Russian political party in Ukraine, initiated the procedure of Zelensky’s impeachment because of this decision, which he characterized as “an attempt to shut mouths of those who raise the truth.”

'Zimbabwe: Friend to all, enemy to none'