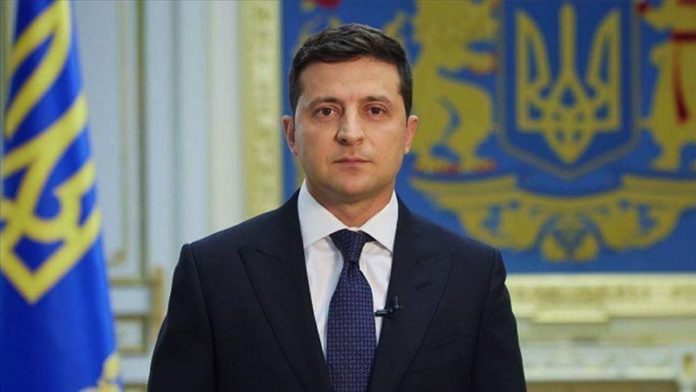 Ukraine’s president on Thursday said his country is “always ready” to face provocations, referring to the deployment of the Russian military near the Ukrainian border.

“Muscle-flexing in the form of military exercises on the border with #Ukraine is an attempt to put pressure in the negotiations on ceasefire,” Volodymyr Zelensky said on Twitter, adding the Ukrainian army has not “only strength and power, but also wisdom and balance.”

“Russia’s actions have brought the situation to a dead end. The only way out is diplomacy. Moscow must cease escalating military tensions, immediately and unconditionally reaffirm its commitment to political-diplomatic means of resolving the conflict and recommit to ceasefire,” Kuleba said.

On March 30, Ruslan Homchak, the commander-in-chief of the Ukrainian Armed Forces, said Russia has deployed its military near the Ukrainian border for “exercises.”

In a statement on Wednesday, John Kirby, the Pentagon spokesman, said the Ukrainian military informed the US about “Russian troop movements on Ukraine’s borders.”

“We’re discussing our concerns about this increase in tensions and cease-fire violations and regional tensions with NATO allies,” Kirby said.

Meanwhile, Kremlin spokesman Dmitry Peskov said Russia moves its armed forces within its territory “at its own discretion.”

“It shouldn’t bother anyone, it doesn’t pose any threat to anyone. The Russian Federation is taking the necessary measures to ensure the security of its borders,” said Peskov.

Earlier on Wednesday, Ukraine announced that it withdrew from a tourism agreement with Russia, signed in Kyiv on July 16, 1999.

The Cabinet of Ministers decided to terminate the agreement because it could harm Ukraine’s national interests, Vasyl Mokan, the government’s representative in parliament, said on Telegram.

Ukraine also announced that it banned the import of wheat, rye, sunflower oil and several non-food products from Russia.

Turkey and the US, as well as the UN General Assembly, view the annexation as illegal, as does the EU, which imposed sanctions on Russia over the seizure.​​​​​​​