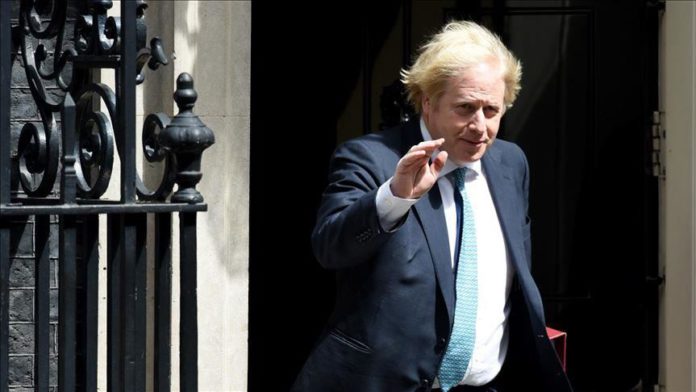 Macron was greeted by Charles, prince of Wales, and his wife Camilla, the duchess of Cornwall, at their London residence, Clarence House.

They greeted each other by pressing their hands together and slightly bowing, rather than shaking hands; they also maintained a 2-meter social distance from each other.

In France, Macron celebrated de Gaulle’s speech, which rallied the French people in June 1940 and broadcast on the BBC.

De Gaulle had called on the French people to rise and resist the Nazi occupation of their country. Exiled French used London as their base to prepare their forces to retake their country.

Macron awarded London France’s highest honor, the Legion d’honneur. At a later date, it was announced that Johnson will award four surviving French resistance fighters honorary MBEs, a British honor that stands for Member of the Order of the British Empire.

Johnson and Macron also took in a huge fly-past by the Red Arrows, the UK’s Royal Air Force Aerobatic Team, in central London.

“This is where de Gaulle was able to call on the French people to join the resistance,” he said. “Because 80 years ago today, on June 18, 1940, the United Kingdom gave Free France its first weapon, a BBC microphone.”

“So the airwaves carried de Gaulle’s determined words and spirit of resistance, which built a bridge across the Channel for those refusing to be enslaved or give up their freedom,” he said.

“I wanted to express the French Republic’s infinite gratitude to the city of London by awarding it, in a wholly exceptional capacity, the cross of the Legion d’Honneur,” he said.

A statement by Downing Street said that both sides welcomed ongoing cooperation on small boats and immigration, and that: “They agreed that the partnership between our countries will be crucial in overcoming the coronavirus pandemic and ensuring the global recovery is green and sustainable.”

On Brexit, Johnson welcomed the agreement to intensify talks in July and said the UK does not believe it to be sensible for there to be prolonged negotiations in the autumn, the statement said.

Johnson and Macron also discussed the situation in Libya and the need for a UN-led political process which brings together all parties to end the conflict.

The statement added: “Finally, the leaders agreed to continue to work closely on other international issues, including the proposed Chinese national security law in Hong Kong which would be a breach of the Joint Declaration.”