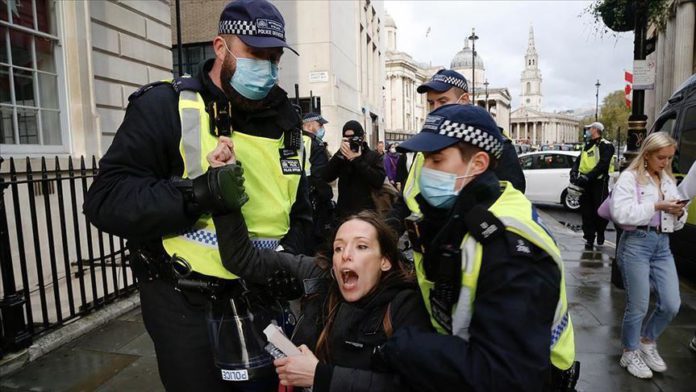 The UK on Saturday reported 23,012 more cases of the novel coronavirus, more than the 20,530 cases reported yesterday.

The government data showed a further 174 fatalities, less than the 224 who died yesterday.

The protest was named “Stop The New Normal,” and was organized by a group, Save Our Rights UK, to “highlight the effect that lockdown and legislative changes have had on people’s lives.”

After demonstrating for a few hours, police asked the crowds to disperse.

Some did, but others remained, leading to the deployment of riot police.

At 5:00 p.m. local time (1600GMT), the Metropolitan Police tweeted: “Ten arrests have so far been made by officers policing the “Stop the New Normal” protest. This protest is no longer exempt from the regulations and we are asking demonstrators to leave.

There is disruption on Westminster Bridge as officers continue to disperse crowds.”

Meanwhile in Manchester, police handed a man a £10,000 fine after shutting down a party he hosted that had over 50 guests.

Greater Manchester Police Assistant Chief Constable Mabs Hussain said the party was “a blatant disregard of the rules and for public health” and was “totally unacceptable in the current crisis.”

Turkey: Industrial production up for 10th month in row

Merkel warns of 3rd wave of coronavirus in Germany