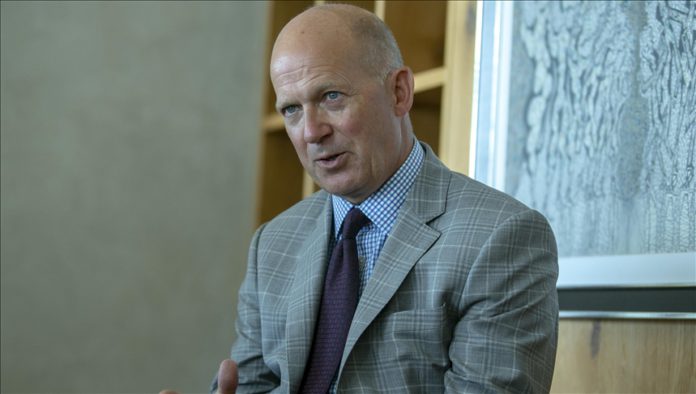 British Ambassador to Ankara Dominick Chilcott said that Turkey has two important advantages; a young population and a state-of-the-art health system, in the face of the pandemic.

Turkey’s Presidential Communications Director Fahrettin Altun on Thursday shared interviews made on Turkey’s combat with the coronavirus outbreak with the ambassadors of the UK, Italy, Pakistan, Azerbaijan and Australia in Ankara.

All interviews can be reached on the directorate’s YouTube channel.

Chilcott noted that there are well-equipped hospitals in major cities of Turkey and the true value of such investment in the health system was understood during the pandemic.

Chilcott, who noted that Turkey has a good supply of vaccines from China, said that this is a promising situation.

“I miss the thought that I can get on a plane and knit back home and see my family and my elderly mother, who I’ve only seen for one day in the last year and a bit now. So, it’s quite a long time,” said Chilcott.

He added that during the pandemic he missed traveling to cultural places such as Gordion, Sivrihisar, Safranbolu, and in and around Ankara, as well as spending time at Turkish restaurants.

“If you look at my own country, United Kingdom, our hospitals came under greater pressure twice in the last year than has been the case in Turkey,” said Chilcott, mentioning that the number of people who died due to COVID-19 in the UK is much higher than in Turkey.

“There’s a big debate back in the UK about whether we acted as quickly as we could’ve done but to be fair to the government , they were facing an unprecedented situation. There was no rule book to follow and they took the steps on the advice of the scientists,” said Chilcott.

Chilcott stressed that the British government had allocated a sum equivalent to $1.5 billion, including aid to “least rich and least developed countries” to combat the epidemic.

“On the vaccination side, we have been one of the first countries to pursue an aggressive vaccination policy at home and we took certain risks maybe in deciding to invest in vaccines before they were approved.

“But actually it’s a policy that’s paid off that we’ve got better access to vaccines now than many other European countries, and our program is more developed than theirs is,” said the British ambassador.

“So, I think at the latest count, we’re about 21 million of my compatriots in the UK have now been vaccinated and that’s a pretty good figure, too.”