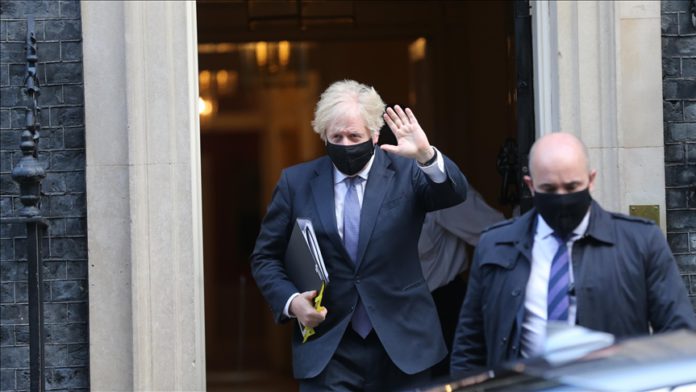 British Prime Minister Boris Johnson will announce a series of measures on Monday to reopen society, including trials of domestic vaccine passports.

The before and after testing in Liverpool will take place at the Hot Water Comedy Club on April 16, the Luna Cinema from April 23-25, a business event at the ACC conference center on April 28, and the Circus Nightclub from April 30 to May 1.

As regards to foreign travel, the government will also unveil a “traffic light” system of rules. Green destinations will not require quarantine, but red and amber countries will. Foreign countries will be classified in these groups depending on their infection and vaccination levels.

Johnson was quoted by local media as saying: “We have made huge strides over the past few months with our vaccine programme and everyone in the country has made huge sacrifices to get us to this stage in our recovery from COVID-19.”

“We are doing everything we can to enable the reopening of our country so people can return to the events, travel and other things they love as safely as possible, and these reviews will play an important role in allowing this to happen,” he added.

Cabinet Office Minister Michael Gove wrote in the Sunday Telegraph: “Vaccination is a hugely powerful tool, but it can never provide 100% protection. That is why we need to look at every option potentially available to ensure the fastest, safest and most sustainable road back to normality.”

“Given the hit the night-time economy and the entertainment sector has taken over the last year, anything which might help businesses reopen sooner must be worth considering,” Gove added. “The Israeli approach involves a smartphone app and the NHS app could serve a similar purpose here.”

The system being tested by the government is not just for vaccinations, but also recent negative tests or natural immunity due to testing positive in the previous six months. Exemptions will be included for those who are advised not to vaccinate, such as those with certain allergies, and for whom repeat testing would be difficult.

People will be able to prove their coronavirus status both digitally and through non-digital, paper means.

The government said the scheme should not be used for either public transport or pubs, restaurants, and non-essential retail. The last three of these will reopen on April 12.

The scheme has prompted a parliamentary backlash, with 72 MPs publicly saying they oppose it as “divisive and discriminatory.” Most of these dissenters come from the backbenches of Johnson’s ruling Conservative Party.

In his Easter Sunday message, Johnson said the UK could look forward to “brighter days ahead.”

Despite a “very tough” year, Johnson said, “this year more than ever, it brings the promise of brighter days ahead for us all.”

“I’ve lost count of the number of church leaders and congregations that have stepped up to support us all in these very challenging times,” he said.

“Millions of Good Samaritans, each of them showing what loving thy neighbor as thyself really looks like in the 21st century Britain.”

“And having done all that during the darkest days of the pandemic, churches across the UK are now helping us light the path out of it by opening their doors as vaccination centers. It’s really, very moving to see it,” he said.

Up to and including April 2, some 31.4 million people have received their first doses of vaccine, and over 5.2 million their second doses.