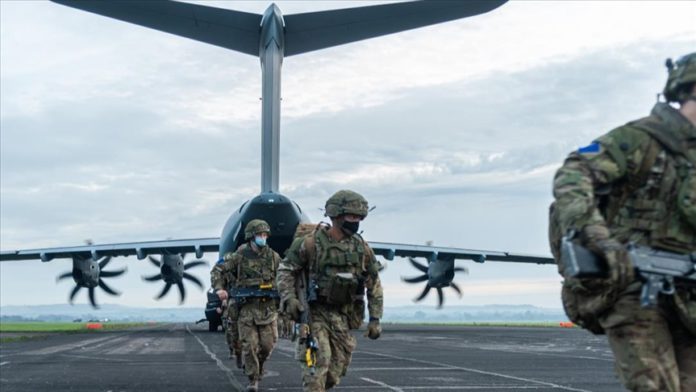 The British government on Monday announced the deployment of 350 additional troops to Poland to bolster NATO’s eastern defenses amid rising tensions with Russia.

At a press conference with his Polish counterpart Mariusz Blaszczak, Defense Minister Ben Wallace stressed the UK’s support for the Polish government in the face of increasingly aggressive Russian military posturing.

“In that spirit of solidarity and helping share each other’s challenges of resiliences we will add to those 100 Royal Engineers by sending a further 350 British troops to Poland in a bilateral deployment to show that we can work together and send a strong signal that Britain and Poland stand side by side,” he said.

Blaszczak expressed gratitude for the reinforcements, saying they will “cooperate with the Polish armed forces on increasing the security especially against the threat on the border.”

The 100 troops already in Poland were deployed there to aid in the migrant crisis of recent years.

The UK has joined efforts at resolving the growing Ukraine crisis, with Prime Minister Boris Johnson visiting there and holding a press conference with President Volodymyr Zelensky two weeks ago and Foreign Secretary Liz Truss poised to visit the capital Kyiv in the coming days.

Officials in NATO have reassured Moscow that it has no intention of expanding further east and have called on President Vladimir Putin to withdraw his forces from Eastern Ukraine to prevent Europe from sliding back into conflict.

“Russia has expressed concerns about potential NATO aggression, but we have been clear that those concerns are fundamentally unfounded as NATO is a defensive alliance at its heart,” a Downing Street spokesman said.

“But we do want to work with Russia to provide diplomatic reassurance on that front. It is not about making concessions as the PM and other Western leaders have said all European democracies have a right to join NATO,” he added.

Moscow has amassed over 100,000 troops on its border with Ukraine. It has also deployed forces in Crimea in the south and Belarus in the north.

Putin has called such maneuvers military exercises and denied claims of a Russian invasion but has warned NATO against further expansion in what it sees as its region of influence.