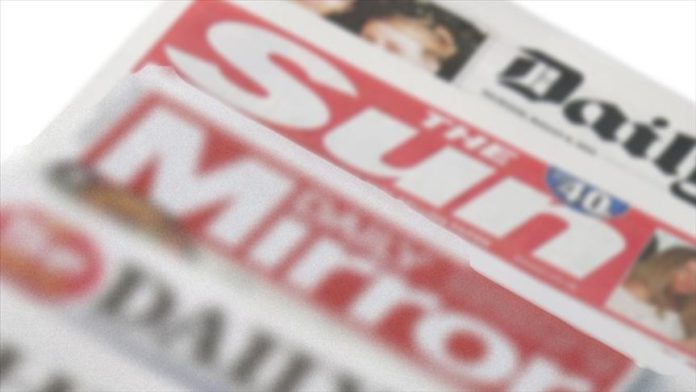 The story – an interview with Rowling’s first husband Jorge Arantes – ran under the headline, “I slapped JK and I’m not sorry.”

Labour MP Jess Phillips, a vocal women’s rights campaigner, tweeted: “The sun headline is awful, the perpetrator more awful still. You’d be surprised how only his hideous arrogant admission will allow some to believe. Still too often doubt and disbelief are the best weapon abusers have in their arsenal… ‘no one will believe you.’”

Gillian Martin, a member of the Scottish parliament, tweeted: “The Sun’s headline quoting JK Rowling’s abusive ex-husband is beyond triggering for many abuse survivors, and enabling to abusers. It is irresponsible and dangerous. I could weep for the way women are treated by the tabloid press- still- in 2020.”

The hashtag #dontbuythesun trended on Twitter in the United Kingdom.

Refuge, a charity that supports domestic violence victims, criticized the tabloid for choosing “to amplify the voice of a perpetrator.”

“There are no excuses for abuse. We, proudly, stand on the side of survivors,” it said in a tweet.

Jane Keeper, the charity’s director of operations, said in a statement that calls to Refuge’s National Domestic Abuse Helpline had increased by 66% during the coronavirus lockdown.

“What this has done is give national media coverage to a perpetrator of domestic abuse to attempt to justify his actions,” she said.

“It is never acceptable to hit a woman. Domestic abuse can and does result in domestic homicide – 2 women a week in England and Wales are killed by a current or former partner. This is not an issue to be taken lightly.”

Following the furor, a Sun spokesperson released a statement saying: “We were disgusted by the comments of JK Rowling’s ex-husband, and branded him ‘sick’ and ‘unrepentant’ in our coverage.

“It was certainly not our intention to ‘enable’ or ‘glorify’ domestic abuse; our intention was to expose a perpetrator’s total lack of remorse. Our sympathies are always with the victims.”

The right-wing British tabloid has a long history of controversy, especially on matters of gender and race.

One of The Sun’s most controversial moments was its coverage of the Hillsborough disaster in 1989, a fatal human crush that killed 96 people and left 766 injured at a football match between Liverpool and Nottingham Forest.

The majority of the victims were from Liverpool, and it remains the worst disaster in British sporting history.

The Liverpool Echo, reporting on the Rowling story, referred to the tabloid as “the S*n” and wrote: “People in Liverpool have led the way in urging readers not to buy the paper and continue to encourage shops here not to stock it.”