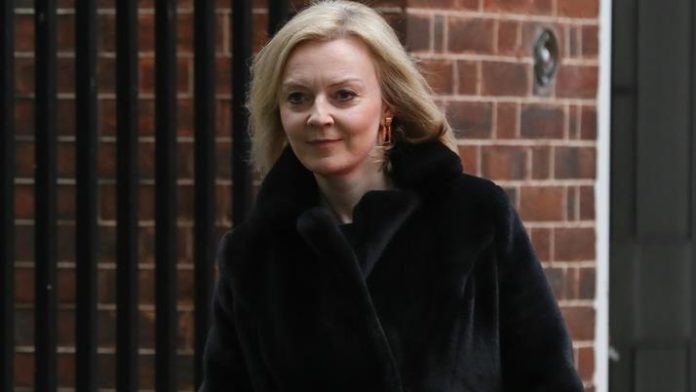 A Russian invasion into Ukraine would turn into “a long-running conflict” with “severe costs,” the British foreign secretary said on Tuesday.

Speaking to Sky News, Liz Truss described the latest situation on the Ukraine–Russia border as a “very dangerous moment for the world.”

“If we saw an invasion into Ukraine, there would be severe costs in terms of a long-running conflict, we could see the undermining of security more broadly in Europe and could see other aggressors around the world see it as an opportunity to expand their ambitions too,” Truss said.

“This is a very dangerous moment for the world.”

She said: “This is, of course, about Ukraine, which is an important sovereign nation but it’s also about the wider stability of Europe and it’s about wider global security.”

Truss added that an invasion into Ukraine will be “hugely damaging for Russia and Ukraine.”

“This, I fear, would not stop at Ukraine. This is an attack on the neighboring states of Russia and other east European countries in trying to undermine legitimacy of them being part of NATO.”

Truss’s remarks came just before the Russian announcement that some of the troops have started returning to places of permanent deployment as military drills are coming to the end.

In the backdrop of rising tensions, a high-level security meeting will be held in London. The Cobra meeting will discuss the latest situation regarding the crisis on Ukraine’s Russia border.

British Prime Minister Boris Johnson will also attend the meeting after cutting short his UK tour after intelligence suggested a Russian invasion into Ukraine could be “imminent.”

Tensions between Russia, Ukraine, and the West escalated after the US issued a stark warning on Sunday, saying the latest intelligence reports show that Russia could launch a military attack against Ukraine “any day now.”

Kyiv said Moscow recently amassed more than 100,000 troops near Ukraine, prompting fears that the Kremlin could be planning another military offensive against its ex-Soviet neighbor.

The Kremlin also issued a list of security demands to the West, including a rollback of troop deployments from some ex-Soviet states, and guarantees that Ukraine would not join NATO.