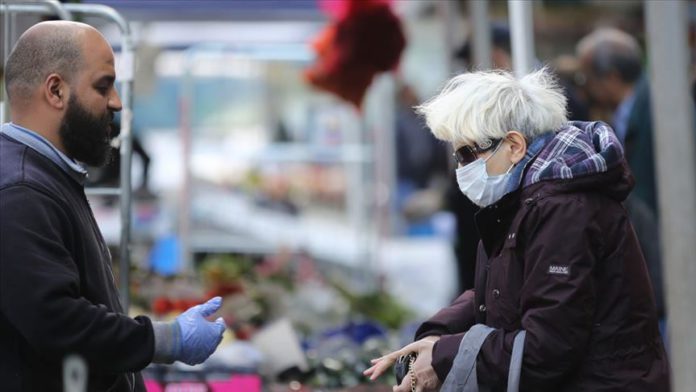 Britain on Sunday reported the lowest daily death toll in months as the number of people testing positive for coronavirus is steadily showing a slight increase for a week.

As of Sunday morning, 36 newly reported deaths brought the tally to 41,698, the worst death toll in Europe and the third worst globally after the US and Brazil.

The number came as the lowest since March 21, but the reporting at weekends since the start of the outbreak showed lower numbers due to technicalities.

The daily number of infections climbed to 1,514 from 1,003 in four days despite the lower number of tests at the weekend.

The government reported more than 170,000 tests last Wednesday, however the same figure released on Sunday is almost 145,000.

Prime Minister Boris Johnson on Sunday announced “probably” fewer than one in 1,000 people now has coronavirus in the UK, hinting that the possibility to come in contact with someone who is infected is now lower.

Speaking during a visit to a shopping mall in east London, Johnson said the dropping figures would provide the government with “more margin for manoeuvre” in easing the two-meter social-distancing rule as calls have been made to reduce it to 1 or 1.5 meter as many restaurants and shops are preparing to reopen for business.

As most of the shops will reopen from Monday, millions of Brits are getting ready to go back to work.

However, the R rate (the rate of infection) in some corners of the country is now above 1, according to various reports. New figures from the Scientific Advisory Group for Emergencies showed on Saturday that the South West of the country now has the highest R number within the country, which is between 0.8 and 1.1.

Secretary of State Grant Shapps played down the rising figure during a daily press briefing, saying there was no need to be alarmed.

While the most of the country is still observing social distancing measures, thousands of people have attended protests in big cities, people have filled sea side resorts by thousands and the use of face mask in all settings has declined.

Most of the British public ditched strict lockdown rules before the government eased them, especially after Johnson three weeks ago refused to sack his chief adviser Dominic Cummings, who flouted the lockdown measures when he was showing COVID-19 symptoms.

The Department of Health and Social Care said there have been 6,772,602 tests so far and 295,889 people have tested positive in total.

Zero virus cases in Tunisia for 4th day in row