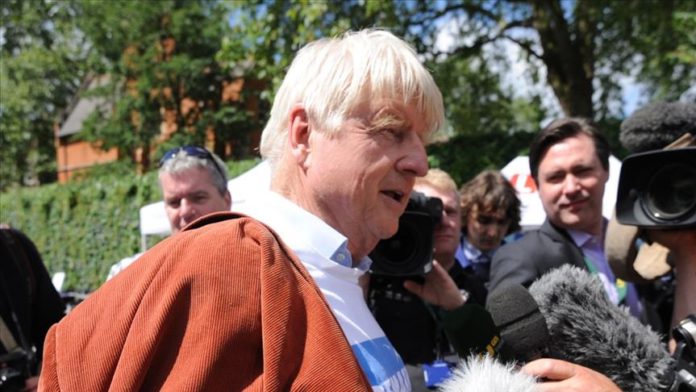 Boris Johnson yesterday signed the UK’s post-Brexit trade deal with the EU as the country’s transition period out of the bloc ends tonight after 48 years membership. He led the campaign to leave the EU in the 2016 Brexit referendum.

Speaking in French, Stanley Johnson, 80, told French radio station RTL: “If I understand it correctly, I am French. My mother was born in France, her mother was totally French as was her grandfather. So for me it is about reclaiming what I already have. And that makes me very happy.

“I will always be a European, that’s for sure. One cannot tell the British people: you are not Europeans. Having a tie with the European Union is important,” he said.

He was initially an ardent Remainer during the Brexit referendum, but a year after the referendum then backed the Leave camp, albeit insisting he did not want to “throw out the baby with the bathwater.”

In October 2017, he wrote: “I was still ready to argue that if you wanted to steer the ship in a different direction, the best thing surely was to stay on board and try to seize control of the steering wheel. In other words, fight from within for change.”

However, he continued, a speech by former European commission President Jean-Claude Juncker that he likened to a “Federal Express” due to his call for an increasingly federal Europe changed his mind.

“The train metaphor is a better reflection of reality,” Stanley Johnson said. “Mr Juncker’s Federal Express is heading down the track at an ever-increasing speed in a direction we really don’t want to go. Even if Britain stayed on board, I doubt if we would be able to change the points on the track ahead, or even slow the train down.”

In August 2020, Stanley Johnson said speaking on a podcast in the UK: “Anybody who thinks, ‘Oh well, we have a free trade agreement with the EU but we don’t have to bother about harmonisation’ is in cloud cuckoo land.

“Why on earth should anybody give us a free trade agreement if we’re not going to apply the same sort of standards to our production processes as our competitors are?”