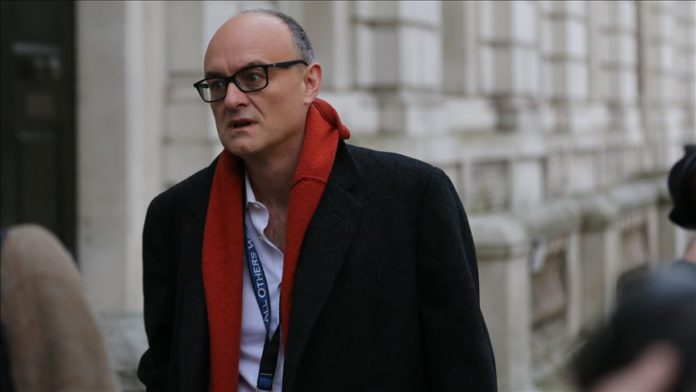 Dominic Cummings, the most senior and controversial adviser to British Prime Minister Boris Johnson, resigned with immediate effect on Friday, the BBC reported, in a significant move within the upper echelons of the British government.

Cummings, who is unelected, has proven to be one of the most controversial and divisive figures in modern British politics.

He was a key figure in the victorious Vote Leave campaign during the Brexit referendum in 2016, and the resounding Conservative Party victory in the 2019 general elections.

With signature flamboyance, Cummings made a show of leaving the front door of 10 Downing Street carrying a brown box with his belongings shortly before it was made public that he was leaving the government.

During the national coronavirus lockdown in March, Cummings flouted the rules to visit family in the north of England, which led to unanimous public condemnation.

In an unprecedented move for an unelected adviser, he held a news conference defending his actions — saying he wanted to look after his children and was concerned he had coronavirus himself.

The excuse proved as inflammatory to the public as his original actions, costing the government a huge drop in public trust it has since been unable to regain.

He was often portrayed by the media as a Svengali-like figure, and the lockdown breach saga underlined him as indispensable to the prime minister, with some local media outlets describing Cummings as Johnson’s “brains”.

Cummings coined the slogan “Take Back Control” during the 2016 Brexit referendum, which also saw “fears of mass Turkish immigration to the UK” if it stayed in the EU whipped up to win the vote.

Since the lockdown saga, he has been a consistent focus of media and opposition political attention.

In the government, he burned bridges through his extremely abrasive style not only with the media and the civil service, both of which he held in open contempt, but also MPs in the ruling Conservative Party, even those who vocally back Brexit.

With the exception of his close allies, the reaction to his dismissal was largely positive, even among many Conservatives.

Senior Conservatives told local media it was an opportunity for Johnson to move past the drama and have a fresh start at being prime minister, as well as governing in a more positive style following a year of an uncompromising and bullying style of governance.

Matters came to a head this past week. Cummings’ ally, Lee Cain, was dismissed as the director of strategic communications at 10 Downing Street. Both men then tried to install Cain as the chief of staff, but the move met sharp internal resistance, and Cain eventually quit.

There is also speculation in local media that Cummings and his allies have been leaking important information — such as the news of the latest lockdown — to the media to force Johnson’s hand on certain matters.

Following Cain’s resignation, Cummings said this week he would stay until the end of the year but has now quit with immediate effect.