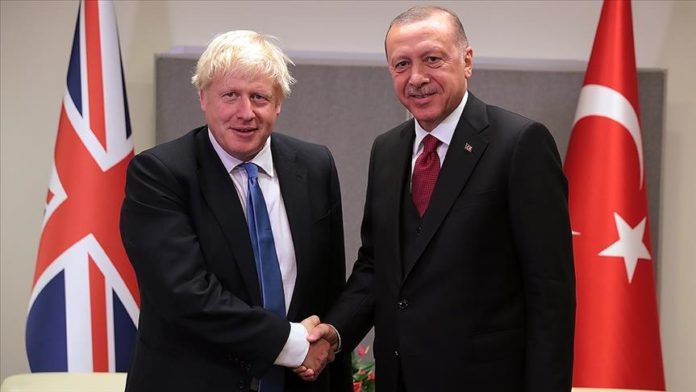 Johnson “offered his condolences following the deaths of 13 Turkish citizens in northern Iraq and condemned killings by PKK terrorists,” said the readout by Johnson’s office.

The discovery of the massacre was announced on Feb. 14, after 13 bodies were found during Turkey’s anti-terror operation in Gara, northern Iraq. One of the victims of the terrorist PKK was later found to be an Iraqi citizen, but the rest were Turkish nationals.

Also according to the readout, the two leaders discussed the importance of Turkish-EU relations and trade.

“Both leaders welcomed the agreement of the UK-Turkey Free Trade Agreement in December and agreed that it should form the basis of further trade and investment between our countries,” it said.

Upcoming UN-led Cyprus talks on Cyprus were also on the agenda, as Johnson expressed support for a “comprehensive, just and lasting settlement of the Cyprus issue, based on the internationally accepted model of a bi-zonal, bi-communal federation.”

Turkey and Britain, along with Greece, are the three guarantor countries for the island of Cyprus.

Next month the UN is due to hold informal 5+1 talks on the Cyprus issue, including the president of Turkish Cyprus and the Greek Cypriot administration leader, along with the three guarantor countries, plus the UN.

Johnson also underlined the importance of implementing the cease-fire agreement in Libya as well as reducing the tensions there, the readout added.