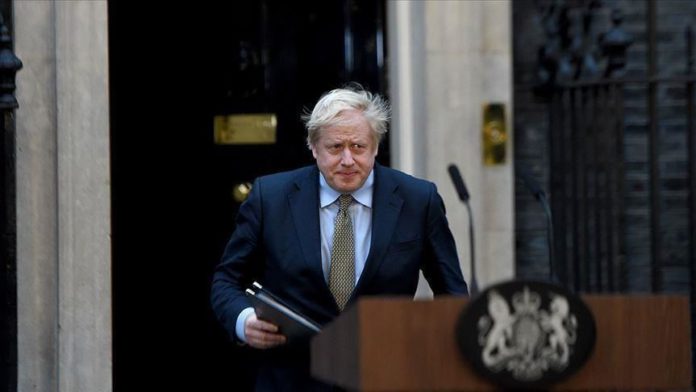 British Prime Minister Boris Johnson announced Tuesday a raft of new measures to stem the tide of rising cases of coronavirus across England.

He said that “a stitch in time saves nine,” stressing that: “This is by no means a return to the full lockdown of March, we are not issuing a general instruction to stay at home.”

The measures announced were: employees working from home where possible, only traveling to work if home working is not possible; all pubs, bars and restaurants operating table service only and closing at 10 p.m. (0900GMT); face masks being extended to staff in retail, taxis, and hospitality; limiting numbers at weddings to 15 and funerals to 30, and a cancellation of the planned partial reopening of sports stadiums that was due on Oct. 1

These restrictions could be in place for six months, he said.

Complacency, Johnson said, could be “our undoing.”

The prime minister said that the rise in cases was not due to an increase in testing, but a rise in the number of tests bringing back positive results.

He also stressed that schools and universities will not close.

Taking a tougher line, Johnson said there was nothing more frustrating for the rule-obeying members of the public than seeing others flout the rules. To this end, the financial penalty for refusing to wear a mask or breaking the rule of no more than six people meeting in public will double to £200 ($256). The police also have the option of drawing on military support if they ask for it.

Johnson warned that if the rate of infection is not brought down then he will “deploy greater firepower with significantly greater restrictions.”

The government U-turn on working from home was widely noted in local and social media.

Recent weeks saw a major push by the government, bolstered by the country’s influential right-wing press that is close to the ruling Conservative Party, to get people back into offices to aid economic recovery.

Johnson will give a speech to the nation tonight. This morning, he chaired a meeting of COBRA, the British government’s emergency coordination committee, with the participation of the leaders of devolved demonstrations in Edinburgh, Cardiff and Belfast.

On Monday, the chief medical officers of the UK’s four constituent nations – England, Scotland, Wales, and Northern Ireland – all agreed to raise the COVID-19 alert level from Level 3 to Level 4, meaning the outbreak has increased from being “in general circulation” to “transmission is high or rising exponentially.”

England’s chief medical officer and chief scientific officer warned in a coronavirus briefing Monday that unless action was taken the country could see 50,000 cases a day by mid-October, and over 200 deaths per day by mid-November.

However, he added that a second national lockdown would be a catastrophe, and that it would be a “government failure – not an act of God.”

Starmer condemned the collapse of the national test and trace scheme, saying it had failed at the moment it was most needed.

The latest restrictions were, he said, “necessary, but not inevitable.”