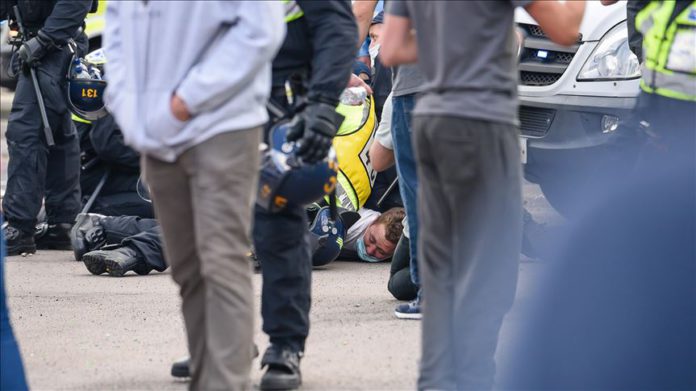 At least 10 people have been arrested when clashes broke out between anti-immigration far-right protesters and the police at the entrance of Dover harbor Saturday.

“Kent Police officers made 10 arrests as they worked to minimize the disruption caused by protests in Dover,” a statement from the police said.

One slogan read “Rise above fear. Refugees welcome,” while another showed a drawing of Alan Kurdi, a Syrian toddler whose body was washed ashore Turkey’s western coast in 2015.

The Kent Anti-Racism Network said in a statement they were holding a protest to show “solidarity” with refugees.

Far-right groups said they were holding a protest “to protect Britain’s border” in an online campaign targeting the Channel crossings of immigrants.

Police said there were “two separate protests relating to migration” in the area and officers maintained a safe distance between them.

The anti-immigration far-right response has caused tensions across the UK especially after last week reports of the passage of more than 400 migrants from France to Dover coasts in a single day.

Some far-right vigilante groups have been active in the area to film, document and intercept the migrants who took on the perilous journey to reach the UK soil from French coasts.

British and French authorities have been in talks to end the illegal passage of migrants to the UK and target human traffickers who exploit them.