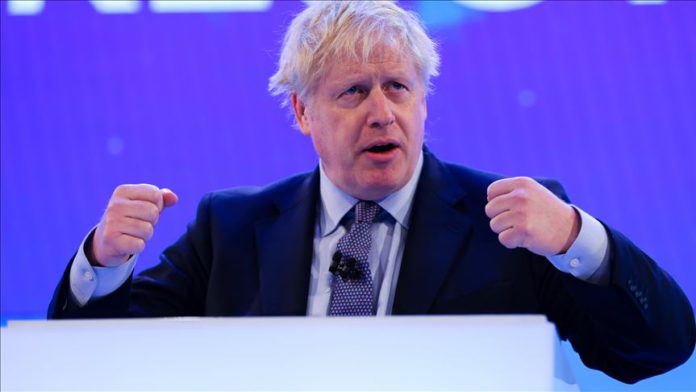 British Prime Minister Boris Johnson visited Scotland on a one-day trip on Thursday, saying the UK’s response to the coronavirus pandemic showed the “sheer might” of the union as support for Scottish independence rises.

It was his first visit to Scotland since winning the general election as leader of the center-right Conservatives last December, and comes ahead of his first anniversary as prime minister on Friday.

Johnson visited business and military personnel, and claimed that being part of the union saved Scotland’s economy.

Ahead of his visit, Johnson wrote in The Times: “The lockdown forced on us all by coronavirus could have spelled disaster for the country, an economic tsunami that washed away hundreds of thousands of Scottish jobs.”

“But it didn’t happen,” he said. “There has always been one thing of which we could be sure: that Scotland would not be forced to face this crisis alone. Because Scotland is an integral part of the UK.”

“The past six months have shown exactly why the historic and heartfelt bond that ties the four nations of our country together is so important and the sheer might of our Union has been proven once again,” he said.

The Scottish National Party is a left-wing nationalist party that controls the devolved Scottish government.

Ian Blackford, the SNP’s leader in the UK parliament, told the BBC: “I think he’s going to find that this message is going to go down particularly badly in Scotland.”

“I think the days of telling Scotland that we are either too wee [small], too poor or too stupid really is over,” he said.

“I think what we’ve demonstrated over the past two months in the areas of devolved responsibility and of public health is that the leadership that has been shown by our first minister [Nicola Sturgeon] is in sharp contrast with the bluster we have seen from Boris Johnson.”

Scottish First Minister Nicola Sturgeon tweeted ahead of Johnson’s visit: “I welcome the PM to Scotland today. One of the key arguments for independence is the ability of Scotland to take our own decisions, rather than having our future decided by politicians we didn’t vote for, taking us down a path we haven’t chosen. His presence highlights that.”

Local media recently reported that support for Scottish independence was now consistently higher than support for the union, according to the latest polls.

Polling expert Prof. Sir John Curtice said one reason for this swing is that in Scotland “the Scottish government’s handling of coronavirus is rated much more highly than is Boris Johnson’s. That is true south of the border as well.”

Sturgeon currently leads a minority SNP administration in the Scottish parliament, but the polls show her party winning an outright majority in the next Scottish elections in 2021.

Speaking to Sky News on his visit to Scotland, Johnson said he did not want to see a second independence referendum in Scotland.

“Well, we had a referendum in 2014. It was decisive, it was – I think by common consent – a once in a generation event, and what we have seen throughout this crisis is the importance and the strength of the union,” he said.

“We had a referendum on breaking up the union only six years ago. That is not a generation, by any computation, and I think what people really want to do is see our whole country coming back strongly together.”

At her daily coronavirus press briefing, Sturgeon was asked about Johnson’s comments. She was less than impressed.

“I don’t think any of us, and I include myself in this, should be trying to use Covid and the pandemic and the crisis situation we continue to face as some kind of political campaigning tool. This is a pandemic that has taken the lives of more than 50,000 people across the UK,” she said.

“Every leader has a real duty to focus on doing everything we can to tackle this, and not use it as some kind of political weapon,” she said. “None of us should be crowing about this pandemic in a political sense.”

She also spoke on the money Johnson said had been given by the UK to Scotland: “Let’s be clear. This is borrowed money. And the reason it is coming to the Scottish government from the UK government is the UK government has the borrowing powers that Scotland’s doesn’t. Scottish taxpayers will pay the cost of that borrowing just in the same way as taxpayers across the UK will. So it’s not some kind of favour that’s being done for Scotland.”

“If Scotland was an independent country, like Ireland, we would be doing these things ourselves,” she said.

Sturgeon said she would have been willing to meet Johnson had he asked for a meeting – but he did not.