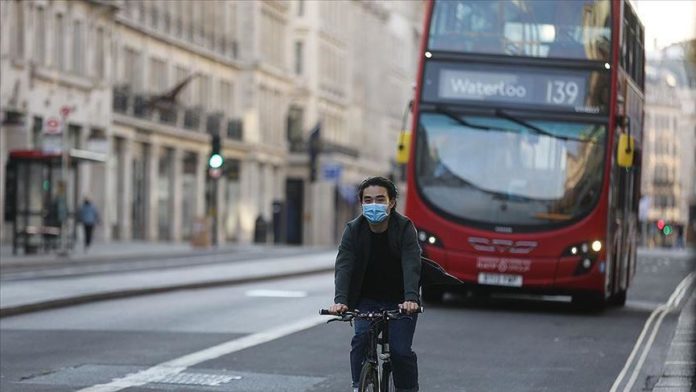 While the rest of the UK remained at home, England underwent its first day on Wednesday of some businesses reopening amid mounting opposition criticism of the government’s easing of the lockdown.

England saw an increase in the numbers of people traveling around the country and using public transport.

The government said people should practice social distancing on public transport, or walk or cycle to work, with critics saying the advice was practically impossible to follow in reality.

A video showing people leaving a packed bus in Stratford, east London, at 6.30 a.m. this morning went viral, provoked criticism of the government’s advice encouraging people to go to work set out in Prime Minister Boris Johnson’s speech on Sunday.

The government shifted the responsibility to commuters, with Transport Secretary Grant Shapps telling the BBC this morning that if transmission rates increased, the government would have to step in.

“We all know what that means – it means going back to staying at home,” he said.

“We have got a big team of marshallers going out through Network Rail, Transport for London, we have got the British Transport Police out there, and we are even bringing in volunteers to remind people that we don’t want to see platforms crowded.”

Shapps admitted, however, that he personally would not get onto a crowded bus or tube.

Labour leader Sir Keir Starmer addressed the nation in a speech broadcast on the BBC on Monday in his capacity as leader of the opposition.

“What we needed from the prime minister last night was clarity and reassurance,” Starmer said, adding that what the public got instead were more questions than answers.

“The prime minister said he was setting out a road map, but if we are to complete the journey safely a road map needs clear directions,” he said.

“Why are some parts of the United Kingdom now on a different path to others?” he asked.

With one eye on the future, Starmer fired a shot across the bow: “After all this, all the sacrifice and the loss, we can’t go back to business as usual.”

“We can’t go back to a society where we clap our carers once a week, but where half of our care workers are paid less than the real living wage,” he said.

“And we can’t go back to a country where we don’t invest in our public services but expect our frontline workers to protect us.”

In an article for The Scotsman published on Monday, Scotland’s First Minister Nicola Sturgeon hit back at the national UK government’s change of advice.

“I am reiterating, in the strongest possible way, that the message to people here in Scotland remains Stay at Home,” wrote Sturgeon, who leads the nationalist Scottish National Party.

“The new slogan introduced by the Prime Minister for the people of England, to “Stay Alert”, is, I am afraid to say, vague and imprecise, and dilutes the crystal clear call for people to remain at home,” she wrote. “Clarity of message is vital, and for that reason I have asked the UK Government not to deploy its Stay Alert ad campaign in Scotland.”

“We must not squander the progress made by easing up too soon,” she wrote. “Let me be blunt about the consequences if we do that – more people will die and, instead of being able to loosen restrictions, we will be faced with having to tighten them. That is a risk we cannot afford to take.”

In Wales, First Minister Mark Drakeford said on Sunday: “Our advice has not change in Wales.”

“We will continue to make decisions, which are right for Wales, using information and expert advice about how coronavirus is circulating here to keep us safe,” added Drakeford, who hails from the main opposition Labour Party.

Adam Price, leader of the Welsh nationalist Plaid Cymru, said Johnson’s “message is confusing and dangerous. You cannot stay alert to something you can’t see. The UK Government has cut itself adrift of the three nation approach which now exists between Wales, Scotland and Northern Ireland. There is no clearer and simpler message than ‘stay at home’,” he said.

Northern Ireland’s First Minister Arlene Foster joined Scotland and Wales in rejecting Johnson’s plans, publishing instead a separate roadmap on Tuesday that takes a slower approach to easing the lockdown.

“We will not be driven by a timetable and we know some will be disappointed by that, but our roadmap doesn’t answer every query, it provides people with an indication of how things might move in the weeks and months ahead,” said Foster, who heads the pro-British unionist Democratic Unionist Party.

Matthew O’Toole, who heads the Irish nationalist Social Democratic and Labour Party, said: “No 10 as a machine just hasn’t been set up to think about dealing with devolution, in the way it probably should.”

Johnson said he aimed to reopen schools from June 1, but the National Education Union (NEU) hit back.

“So far the Government has not engaged with us to discuss any further advice on social distancing, testing in schools, PPE [personal protective equipment] or about those who are vulnerable, including BME staff,” the NEU said in an email to its members.

“Our strong advice is that, on this basis, you should currently not engage with any planning based on a wider reopening of schools,” the e-mail added.

NEU General Secretary Dr. Mary Bousted said: “This reckless and rushed approach has created a level of uncertainty and stress for school leaders which is simply unmanageable.”

Dave Ward, general secretary of the Communication Workers Union, said: “The messaging from this Government throughout this crisis has been a total joke, but their new slogan takes it to a new level.”

“Stay alert?” he asked. “It’s a deadly virus not a zebra crossing.”

Australia: COVID-19 restrictions to remain for a month

Turkey's Borsa Istanbul up 1.47% at close