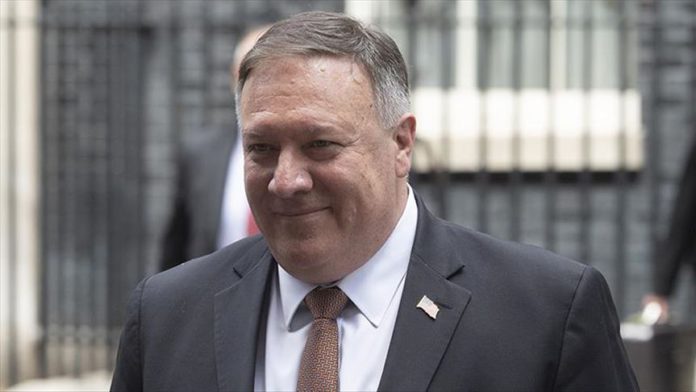 British Prime Minister Boris Johnson and US Secretary of State Mike Pompeo discussed the “importance of working together with 5 Eye countries on the technologies of the future” – referring to the alliance of Australia, Canada, and New Zealand with the UK and US – a government statement said Tuesday.

Meeting at the government offices on Downing Street, Johnson and Pompeo spoke about “shared global security and foreign policy issues, including China’s actions in Hong Kong and Xinjiang, the situation in Iran, and the Middle East Peace Process,” it said.

“The Prime Minister and Secretary of State also underlined their commitment to negotiate a strong UK-US Free Trade Agreement that benefits the economies of both countries,” it added.

Britain has been holding talks with US for a post-Brexit trade deal with the country to maximize its trade, set to face new challenges on Dec. 31 – the deadline for the transition period with the EU.

At the meeting Johnson also reiterated “the need for justice to be done for Harry Dunn and his family,” citing the “strong feeling among the people of the UK that justice must be delivered.”

British teenager Dunn was killed in a traffic accident last year by Anne Sacholas, the wife of a US diplomat with diplomatic immunity. She left for the US shortly after the accident. British requests to extradite her for a trial fell on deaf ears, and this January Pompeo rejected such a move, calling the decision “final.”

Pompeo also met Foreign Secretary Dominic Raab and other local politicians during his visit to London.