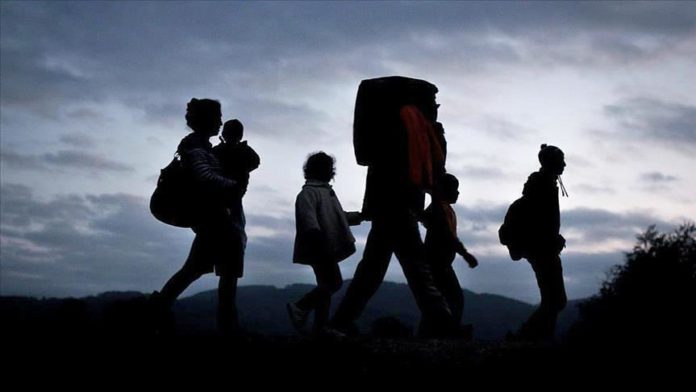 Another wave of leaks has hit the British Home Office, with the Guardian and the Financial Times (FT) reporting on further details of the government’s plans to build offshore asylum centres, amid reports of tensions between Home Secretary Priti Patel and her civil servants.

On Wednesday night, the Financial Times reported that No 10 confirmed that the UK was considering offshore asylum processing centers.

The British daily reported that Patel had asked civil servants to explore setting up a centre on the Ascension Island, located in the South Atlantic Ocean over 4,000 miles from the UK, but the plan was ruled out on feasibility grounds.

The plan is based on the program put in place by the Australian government. For over eight years, Australia sent all its asylum seekers to two remote facilities in the poor Pacific island nations of Papua New Guinea and Nauru.

The policy was the subject to international condemnation for human rights abuses and breaches of international law. At least a dozen people died in the detention centers, and in 2017 Australia was ordered to pay over $70 million in compensation to almost 2,000 detainees.

On Thursday, The Guardian quoted Elaine Pearson, the Australia director of Human Rights Watch, as saying that Australian offshore processing “has been a human rights disaster.”

“Prolonged and indefinite detention has driven people to the breaking point, with alarming levels of trauma, depression, and other mental health conditions,” she said. “Australia’s harsh refugee policy is no global model.”

His spokesperson added that the idea was “ludicrous, inhumane, completely impractical, and hugely expensive for taxpayers.”

The Ascension Island proposal was popular with supporters of the ruling Conservative Party, however. A YouGov poll showed 62% support among Conservative voters, and 40% public support.

Prime Minister Boris Johnson’s spokesperson told the FT: “We are developing plans to reform our illegal migration and asylum policies so we can keep providing protection to those who need it, while preventing abuse of the system and criminality.”

“As part of this work we’ve been looking at what a whole host of other countries do to inform a plan for the United Kingdom. And that work is ongoing.”

The FT quoted immigration barrister Colin Yeo as saying: “If you intercept people and you remove them, the Refugee Convention prohibits you from indirectly returning them to their country of origin.

“If you take them somewhere like north Africa, you have to guarantee that they won’t send them back to their country of origin because you’re just not allowed to do that.”

Another idea that was discussed was boats with pumps creating waves that would push the migrant boats back into French waters. Concerns, however, were raised that overloaded migrant boats would be at risk of capsizing.

Late last night, The Guardian reported another batch of leaks that showed the Ascension Island plan was one of many, and that preparations were more extensive than previously thought.

The government also considered building asylum centres in Moldova, Morocco, and Papua New Guinea. The UK policy would go further than Australia’s; the former would relocate asylum seekers who entered the UK, while the later was only intercepting boats outside Australian waters. The Guardian also reported that the request for advice on third country options came from the prime minister himself.

The civil servants said offshore centres in the Ascension Island would be “extremely expensive and logistically complicated,” with the rough cost adding up to £220 million ($283.1 million) building cost per 1,000 beds and running costs of £200 million. Morocco and other North African countries would be “highly unlikely” to accept asylum seeker centres. Moldova has “endemic” corruption. Papua New Guinea was 8,500 miles away, and there were “significant political and logistical obstacles.”

This included the fact that a UK detention centre would “renew scrutiny of Australia’s own offshore processing.” The document added: “Politically, we judge the chances of positive engagement with the government on this to be almost nil.”

Leaks from inside the government to the media are not uncommon in Britain, but the scale and sensitivity of the information hints to turmoil inside the UK Home Office.

On Feb. 29, the top Home Office civil servant Philip Rutnam resigned in a spectacular fashion, even giving a rare media statement. He accused Patel of presiding over a culture of bullying, and is taking her to court.

Politico reported: “Allies of Patel were last night accusing disgruntled civil servants in the Home Office, as well as officials at the Foreign Office, of leaking very tentative ideas, most of which were never likely to become policy, in order to embarrass the home secretary.”

A source in the government told the website: “There is a rotten core of civil servants who have never gotten over Brexit, want revenge for the incompetent [Philip] Rutnam and fear the hard rain that is coming. They’re the enemy within and will be rooted out.”