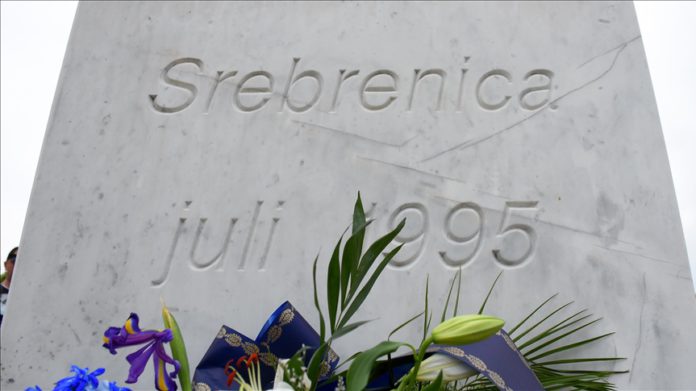 A UK panel has held a commemoration for the 26th anniversary of the Srebrenica genocide that took place in Bosnia and Herzegovina in 1995 during the chaotic and violent breakup of Yugoslavia.

The forum took place on an online webinar and was organized by the East London Mosque and London Muslim Centre, the Bosnia Heritage Foundation and the Muslim Council of Britain (MCB).

“The Srebrenica Genocide was a harrowing event that took place on European soil only 26 years ago. Following the end of the Second World War in 1945, the world was promised and assured that the horrors of the holocaust and the mass killings would not be repeated — ‘never again!’ we were told. Yet only 26 years ago, more than 8,000 innocent Muslim men and boys were massacred,” said Muhammad Habibur Rahman, chairman of the East London Mosque.

“Each year, we commemorate this genocide to remember those who were martyred by Serb forces and to remind ourselves of the horrors that took place during that dark period of history. We must work together to ensure that nothing like this should ever happen again, regardless of who the people are and where in the world they are from,” he added.

Catherine West, Labour MP and shadow foreign minister, spoke of the duty and importance of the UN and the wider international community in upholding international and human rights law to prevent such atrocities from taking place. West drew upon the UN’s ‘responsibility to protect’ principle that was drawn up by the institution in 2005 with the aim of preventing genocide, ethnic cleansing and mass atrocities in the near and far future.

“On the 26th anniversary of the Srebrenica genocide, an incredibly dark and horrible period that saw the deaths of innocent civilians on European soil, we are reminded of the importance of a united and effective international community, one that stands up for the weak and needy of the world and against those who wish to impose their will on others. This is important now more than ever when we see similar unfolding events in many places across the world,” West said.

The Labour parliamentarian also warned of the dangers of denying the massacre as a genocide and how it could lead to future atrocities taking place due to the ignorance and refusal to learn from the past.

In 2016, Srebrenica, which now retains a majority Serb population, elected Mladen Grujicic as its first mayor since the end of the war in 1996. Grujicic, a Serb nationalist, denies that the massacre was a genocide and has argued that the International Criminal Court (ICC) in The Hague, the Netherlands has got no evidence to prove that it is.

“Denialism sets a dangerous precedence for future generations and it is a worrying sign in the current state of affairs we live in, especially when we see the atrocities being committed against the Rohingya in Myanmar and the Uyghurs in China. Denialism allows the perpetrators of such atrocities to continue unabated and without being held to account,” the MP said.

Following the death of longtime dictator Josip Broz Tito in 1980 and a decade of instability and weakening governance, Yugoslavia began to violently break up along ethnic and religious lines in the early 1990s. Armed conflicts saw the independence of Croatia, Slovenia, Macedonia and Bosnia and Herzegovina from the state of Serbia, which fought against such independence.

During the conflict, which lasted from 1992 to 1996, Serb forces committed numerous acts of war crimes and crimes against humanity. These included the four-year siege of the Bosnian capital Sarajevo, the longest siege of a capital city in the history of modern warfare, that saw the deaths of 13,952 people including 5,434 civilians, and indiscriminate attacks on civilians and infrastructure in towns and cities across the country.

Under former commander Ratko Mladic, Serb forces surrounded the Bosniak town of Srebrenica, despite it being a declared safe zone by the UN, who had stationed Dutch troops nearby. Regardless of the presence of UN peacekeeping forces, Serb units captured the town in 1995 and the following days saw the rounding up of thousands of Muslim men and boys who were put into concentration camps and shortly killed by Serb forces.

The genocide took place from July 11-12, where up to 8,372 innocent Muslim men and boys were massacred at the hands of Serb forces. The remains of the martyred are still being discovered by the Bosnian Federal Commission of Missing Persons which identifies the genocide victims in mass burial sites through DNA analysis. The martyred discovered in mass burial sites are given an official burial service at the memorial center of Potocari.