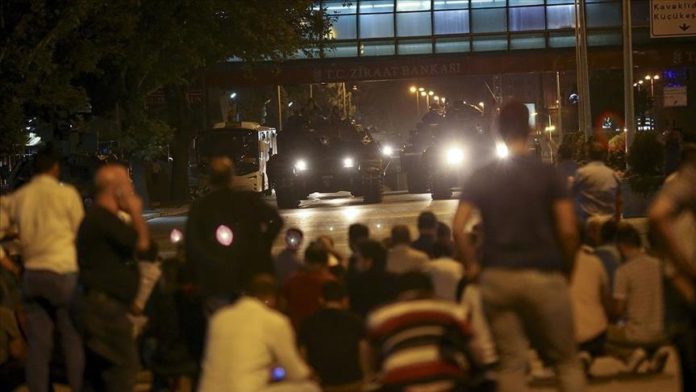 An online event was held Wednesday marking the fifth anniversary of the failed July 15, 2016 coup attempt in Turkey orchestrated by the Fetullah Terrorist Organization (FETO) with important guests recalling the chaotic events of that summer night.

The webinar was organized by the Centre of British-Turkish Understanding (CBTU) and hosted a number of important speakers including Umit Yalcin, the Turkish ambassador to the UK, Sir Alan Duncan, minister of state for the foreign and commonwealth office, and Abdurrahim Boynukalin, chairman the Justice and Development (AK) Party’s office in the UK.

“On that fateful 15th of July, Turks opened their eyes to a normal sunny summer’s day in our beautiful country. Of course, there were some rumors spreading that the Gulenist terrorist organization — FETO — was planning an attack on our nation, on our people, and on our cherished democracy,” Boynukalin said in his recollection of the events that were to later unfold.

“Despite our misgivings about this group, no one in Turkey ever imagined that FETO would go that far to attack fellow Turks and our institutions. After the statement was issued on the public broadcaster TRT, some of the terrorists used our air force to create sonic booms to frighten people on the streets and in their homes. They resorted to bombing the Turkish parliament while MPs were inside and they attacked the president’s residency as well as several buildings and shot at civilians indiscriminately,” he added.

The CBTU chair described the scene of that fateful night as one from a horror movie from which no one expects to experience in real life. However, he praised the “strong resilience” of the Turkish people in standing up fearlessly to the perpetrators of this cowardly attack, reminding the audience that Turkish people are well accustomed to past coup attempts and were not going to cower so easily in this most recent one.

Strength of democracy lies with its people

Reflecting on the events of July 15 was Sir Alan Duncan, a senior Tory minister in the UK government and the first senior politician in Europe to have visited Turkey in the aftermath of the failed coup. Duncan spoke of the importance in upholding democracy and why his journey to Ankara shortly after the failed coup demonstrated his belief and support in the Turkish government as well as its democratic institutions.

“I think there is one very, very important lesson in life for any politician who believes in democracy: It is that whatever the differences between people, the way to solve them is not through guns and bombs and attempted coups. You do it through arguments and elections, maybe some demonstrations, but not an attempted coup,” he said.

“So when it was clear that so much had been threatened by the coup attempt, I decided that my first action as minister was to get on a plane. I didn’t ask the prime minister. I just did it, and I wanted to fly to Ankara to express my firm solidarity and that of Her Majesty’s Government in the UK with the government of the day and crucially the people of Turkey,” he added.

Duncan spoke of his shock and emotion as a fellow UK parliamentarian visiting the bombed and damaged Turkish parliament in Ankara and speaking with the traumatized speaker of the parliament as well as other Turkish MPs, describing the visit as a “sobering and indeed frightening” experience, and drew comparisons to the days of the Second World War, when the UK parliament was bombed by Nazi forces during the Battle of Britain.

The minister of state for foreign affairs recalled how some people in the UK believed that the failed coup attempt was in fact orchestrated by the Turkish government and how he moved quickly to dispel these baseless lies, arguing that his experience in visiting Ankara and the Turkish parliament as well as speaking to the Turkish people made it clearly evident that this was not the work of a government but that of a terrorist organization.

“I had to very quickly try and explain to people in the UK what this meant because some people were saying ‘Oh it was staged managed, it wasn’t really serious,’ and I was able to explain [the truth] because I had been able to see it for myself, and it was the equivalent — had it happened in London — of the British army driving tanks over Westminster Bridge and killing civilians, of bombs being dropped on Buckingham Palace and the Houses of Parliament while members were inside, and the attempt on the life of the prime minister and the Queen.”

FETO and its US-based leader Fetullah Gulen orchestrated the defeated coup of July 15, 2016 which left 251 people killed and nearly 2,734 wounded. FETO terrorists used military hardware including F-16 fighter jets, helicopters and tanks to forcibly overthrow the elected government and to violently put down popular resistance by the Turkish people.

FETO’s attempted coup, however, ended in failure due to the overwhelming response and rejection of the Turkish people, who stood firm in the face of terrorism. Turkey also accuses FETO of being behind a long-running campaign to overthrow the state through the infiltration of Turkish institutions, particularly the military, police and judiciary.

By posing as an organization that builds schools, charities and foundations, FETO was able to brainwash, manipulate and deceive many of its followers. However, following the defeated coup, it was revealed that these projects were merely a front to strengthen the terrorist group and raise funds to overthrow Turkey’s democratic institutions.

Use of force against Iraqi protestors 'deplorable': EU