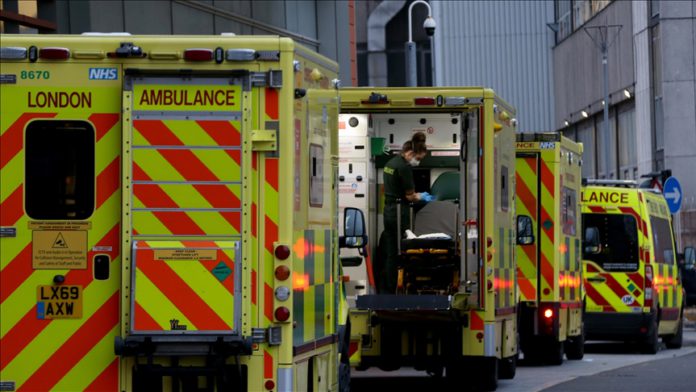 Cases of the omicron coronavirus variant across the UK have surpassed 45,000, the Health Security Agency said Monday.

Health authorities said the total number of omicron cases in the UK is now 45,145, while the country reported 91,743 new COVID-19 cases, the second highest daily figure since the start of the pandemic. Of those, 8,044 tested positive for omicron, they said, adding 44 more people lost their lives to the virus within 28 days of a positive test.

Monday’s figure for omicron is lower than that for Sunday, when 12,133 confirmed cases were reported, but statistics are normally lower on the first day of the week due to a lack of reporting at the weekend.

Prime Minister Boris Johnson said the government was reviewing the situation in the country “hour by hour” and warned that he will “reserve the possibility of taking further action” before Christmas.

“We will have to reserve the possibility of taking further action to protect the public and to protect public health, to protect the NHS. We won’t hesitate to take that action,” he said following a Cabinet meeting that lasted two hours.

“We should keep the data from now on under constant review…hour by hour,” he added.

Millions of people and businesses are trying to decide what to do during the festive season as the government has so far failed to give a clear message about possible restrictions.

“So no change – for now. Hospitality needs notice if there are to be any changes looked at next week ahead of New Year and crucially we still need support,” Kate Nicholls, the head of UKHospitality, the leading hospitality trade association in the UK which represents the interests of the UK’s hospitality sector, wrote on Twitter.

“Businesses are in limbo having lost 40%-60% of Dec[ember] trade and with big rent and rate bills and staff wages to pay at end of month.”

France and Germany have banned all non-essential UK arrivals due to fast-rising omicron cases over the weekend, leaving thousands of people with no choice but to stay in the UK during the festive season.

It is feared that more EU member states will introduce new restrictions on people arriving from the UK.

Meanwhile, dozens of trains at London terminals have been cancelled amid fears of rising omicron cases as well as staff shortages due to the coronavirus.

Due to a similar shortage, hundreds of trains have been cancelled in Scotland for the rest of the week in the runup to Christmas.

In London, tens of theater shows have been forced to close their doors due to rising COVID figures since last weekend.

Among the London West End productions which are now cancelled are the musicals Hairspray, Joseph and the Amazing Technicolor Dreamcoat and The Prince of Egypt.

The Globe’s Romeo and Juliet was also cancelled.

“Unlike the late spring and early summer, shows are no longer socially distanced, and it’s difficult to see how they could switch to socially distanced set ups at short notice,” an article by timeout.co.uk said.

“For an industry already financially devastated by the last two years, it’s going to be another very difficult time.”