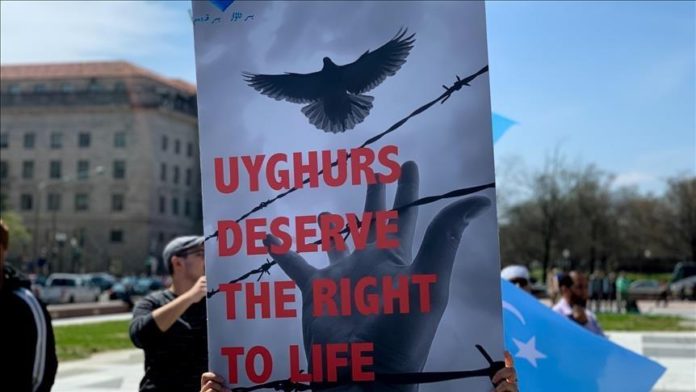 Britain’s biggest Muslim umbrella group on Thursday called upon everyone involved in the Beijing Winter Olympics “to use every opportunity to raise awareness around the plight of the Uyghur people.”

“Approximately 3 million Uyghurs have been forcibly detained at internment camps where they are subject to torture, rape, mass sterilisation, forced labour and made to renounce their Muslim beliefs and practices,” the Muslim Council of Britain said in a statement.

It said some “brave athletes have taken a stand and have refused to take part, in solidarity with the victims.”

“Others are making important gestures to ensure their plight does not go ignored,” the statement added.

Describing the multi-sports event as “Genocide Games,” Zara Mohammed, president of the MCB, said: “China’s crimes against Uyghur Muslims in Xinjiang, as documented by NGOs, survivors and observers, are crimes against humanity.”

She said: “They have been described as a genocide by human rights organisations as well.

“In the spirit of the vision of the International Olympic Committee, to ‘Build a Better World through Sport’, we must not allow China to use these Genocide Games to hide their actions. We all have a moral duty to highlight the plight of the Uyghur people, and to stand firmly against injustice and oppression.”

The MCB also called upon the international community “to support calls for the International Criminal Court (ICC) to open an investigation against senior Chinese leadership for genocide and crimes against humanity committed against the Uyghur people.”

According to UN data, at least 1 million Uyghurs are kept against their will in places Beijing calls “vocational training centers” but which critics call places for indoctrination, abuse, and torture.

As many as 1.6 million Uyghurs have left China to live abroad, according to the World Uyghur Congress.

Rights groups, including Human Rights Watch and Amnesty International, accuse Beijing of oppressing 12 million Uyghurs, most of whom are Muslims.

US: More than 350,000 people without power, additional outages expected