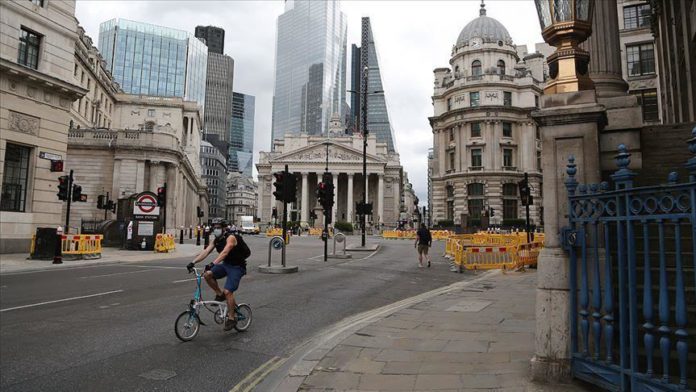 The British government on Friday lowered the country’s COVID-19 alert level from 4 to 3, as health authorities announced that a further 173 people died from coronavirus across the UK over the past 24 hours.

“As of 5pm on 18 June, of those tested positive for coronavirus, across all settings, 42,461 have sadly died.”

The UK’s COVID-19 alert level system has five levels, and has been at level 4 since the system was announced in May.

The move to move down a level was backed by the chief medical officers of all four constituent states of the UK: England, Scotland, Wales, and Northern Ireland.

Under the revision, coronavirus is no longer seen as “high or exponentially rising” but “in general circulation”.”This means the threat level has also been reduced from “severe” to “substantial”.

The chief medical officers said in a statement: “There has been a steady decrease in cases we have seen in all four nations, and this continues. It does not mean that the pandemic is over. The virus is still in general circulation, and localised outbreaks are likely to occur.”

Health Secretary Matt Hancock said: “The UK moving to a lower alert level is a big moment for the country, and a real testament to the British people’s determination to beat this virus.”

“We have to start thinking of a world in which we are less apprehensive about this disease,” he said. “I hope, as we go forward into the autumn, people will be much, much more confident.”

A study by the Office for National Statistics found that black men in England were three times more likely to die from coronavirus than white men overall.

The ONS also found that Muslims had the highest death rate of any religious group.

Nick Stripe of the ONS said: “For the most part the elevated risk of certain religious groups is explained by geographical, socioeconomic and demographic factors and increased risks associated with ethnicity.”

A separate study by researchers published in the Lancet found that South Asians in the UK were the most likely to die from coronavirus after being admitted to hospital.

The report is the largest of its kind to date, but has yet to be peer reviewed. It said that the high rate of diabetes in British South Asians was responsible for 18% of the increased risk of death.

Calum Semple of the University of Liverpool, chief investigator for the report said: “We fail to recognize the huge contribution that has been made by people from Asia to healthcare provision and public sector activity.”

He added: “And because the public sector activities are very human facing, when I say public-facing I mean really face-to-face interactions, I have a suspicion that that has led to exposure risk, which is much greater than other parts of society.

“So, for example, healthcare workers, in care homes, nurses, all the way up to ear, nose and throat surgeons and opticians, you do find that the Asian community makes a significantly greater contribution to these sectors of work.”

After emerging last December in the Chinese city of Wuhan, the virus has spread to at least 188 countries and regions. There are more than 8.5 million confirmed infections globally and an excess of 454,300 deaths, with over 4.17 million recoveries.