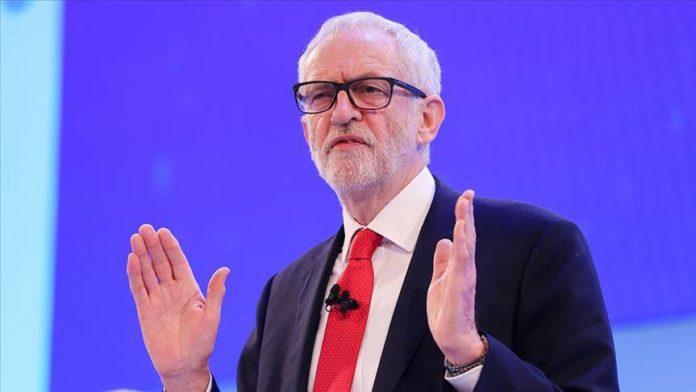 Former Labour Party leader Jeremy Corbyn was suspended Thursday from the party over his response to a report on anti-Semitism.

A Labour Party statement said: “In light of his comments made today and his failure to retract them subsequently, the Labour Party has suspended Jeremy Corbyn pending investigation. He has also had the whip removed from the Parliamentary Labour Party.”

The Equality and Human Rights Commission (EHRC), the UK’s rights watchdog, published a long-awaited report into anti-Semitism in the UK’s main opposition, center-left party under Corbyn’s leadership between 2015 to 2020.

The investigation was launched in 2019, after whistle-blowers came forward saying anti-Semitism complaints were not being dealt with, and that this was evidence of institutionalized anti-Semitism.

Corbyn tweeted in response: “I will strongly contest the political intervention to suspend me. I’ve made absolutely clear those who deny there has been an antisemitism problem in the Labour Party are wrong. I will continue to support a zero tolerance policy towards all forms of racism.”

The report noted “serious failings in the Labour party leadership” in dealing with anti-Semitism complaints.

It added that there were three breaches of the Equality Act under Corbyn’s leadership, related to harassment, political interference in anti-Semitism complaints and inadequate training for those handling the complaints.

For example, it said an email inbox for the complaints was “largely left unmonitored for a number of years and no action taken on the majority of complaints forwarded to it”.

It said there was inappropriate interference on the part of the leadership’s office in the complaints process over anti-Semitism, with at least 23 confirmed cases of this.

The UK’s three main Jewish organizations released a joint statement following the release of the report.

The Board of Deputies of British Jews, the Jewish Leadership Council and the Community Security Trust said the EHRC report was “a damning verdict on what Labour did to Jews under Jeremy Corbyn and his allies”.

The Jewish Labour Movement (JLM), one of the groups that referred Labour to the EHRC, said in a statement that no action was taken on the majority of complaints forwarded to the party.

“Antisemitism within the Labour party had serious consequences for many people, causing real emotional pain and despair to those who have given their lives to the Labour party. As the EHRC points out, it undermines confidence in our politics and the fabric of our democracy,” they said.

Gideon Falter, the chief executive of Campaign Against Antisemitism, said: “The EHRC’s report utterly vindicates Britain’s Jews, who were accused of lying and exaggerating, acting as agents of another country and using their religion to ‘smear’ the Labour party.”

The EHRC’s recommendations included implementing an independent complaints process, admitting previous political interference in the process, and training for those dealing with complaints.

Corbyn responded to the report earlier in the day saying: “One antisemite is one too many, but the scale of the problem was also dramatically overstated for political reasons by our opponents inside and outside the party, as well as by much of the media.

“That combination hurt Jewish people and must never be repeated. My sincere hope is that relations with Jewish communities can be rebuilt and those fears overcome. While I do not accept all of its findings, I trust its recommendations will be swiftly implemented to help move on from this period.”

He added: “Anyone claiming there is no antisemitism in the Labour party is wrong. Of course there is, as there is throughout society, and sometimes it is voiced by people who think of themselves as on the left. Jewish members of our party and the wider community were right to expect us to deal with it, and I regret that it took longer to deliver that change than it should.”

His successor as Labour leader Sir Keir Starmer said the report was a “day of shame” for the party, and that the report’s findings were “clear and stark.”

In a statement, he said: “I found this report hard to read. And it is a day of shame for the Labour party. We have failed Jewish people, our members, our supporters, and the British public.

“And so, on behalf of the Labour party, I am truly sorry for all the pain and grief that has been caused. To Jewish people, our Jewish members, our longstanding Jewish affiliate, JLM.”

He added: “We also need a culture change in the Labour party. It must become, once again, an open and welcoming place for people from all backgrounds, and all communities.

“And if – after all the pain, all the grief, and all the evidence in this report – there are still those who think there’s no problem with antisemitism in the Labour party, that it’s all exaggerated, or a factional attack, then, frankly, you are part of the problem too, and you should be nowhere near the Labour party either.”