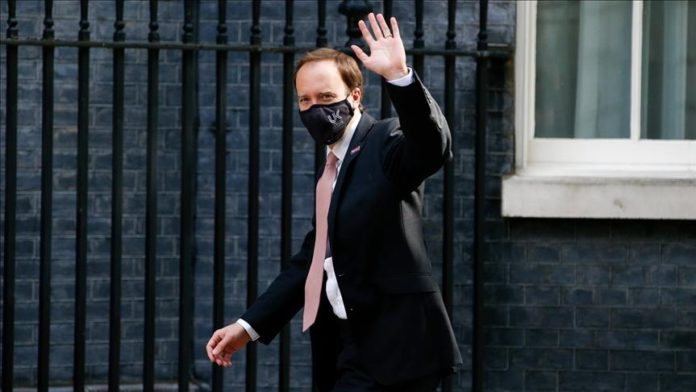 Britain’s justice secretary said on Monday that he ordered his office to be swept for “unauthorized devices” after a leaked video that led to the resignation of Health Secretary Matt Hancock.

The presence of such devices would be “a national security breach,” Robert Buckland told Sky News, adding that he expected results from the sweep, which he ordered on Friday, to come in later on Monday.

“I’ve never seen any camera facilities. I know there is CCTV in the building for obvious security reasons, but I am sure that many of my colleagues will be asking the same question and making sure that the offices are swept just in case there are unauthorized devices in there that could be a national security breach,” said Buckland.

In CCTV footage obtained by British tabloid The Sun on Friday, Hancock was seen looking out his office door before turning around and greeting former aide Gina Coladangelo. The pair then proceed to hug and kiss in the room.

Sajid Javid on Saturday was appointed as Britain’s new health secretary a short while after Hancock resigned from the post.

Javid, the former chancellor of the exchequer and home secretary, replaced Hancock after the former health secretary breached coronavirus social distancing rules by engaging in intimate acts with his advisor.

Brandon Lewis, the Northern Ireland secretary, said the Department of Health and Social Care would undertake an internal investigation into the leaking of the CCTV pictures to The Sun.

EU's unemployment rises to 7.3% in May