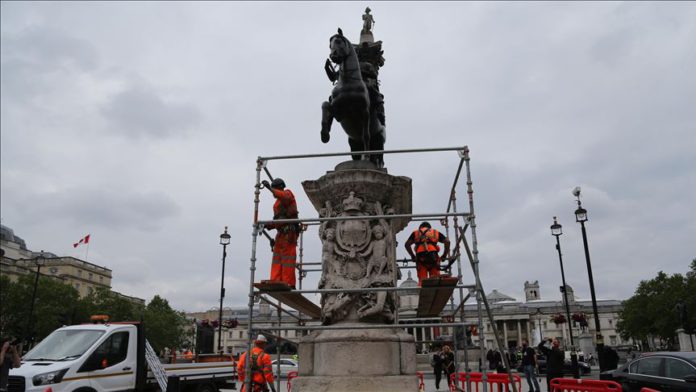 With police warning of violence, more than 1,000 far-right protesters gathered on Saturday in central London to protect statues from efforts to deface or topple them.

Members of groups such as the English Defence League, Britain First, and Football Lads Alliance started gathering in Parliament Square and at the entrance of the Whitehall police barricade.

Protesters threw bottles and beer cans on police trying to block them from entering Whitehall, where the Cenotaph war memorial is located.

Some of the people were seen making Nazi salutes while shouting “England.”

Last Sunday, Black Lives Matter (BLM) protesters tore down the statue of 17th-century slave trader Edward Colston in Bristol and sprayed graffiti on a statue of Winston Churchill in London.

London’s Metropolitan Police issued a Section 60 order in a large area in central London ahead of possible counter-protests and potential BLM protests, even though BLM organizers have cancelled a big rally previously planned in London.

The 1994 Section 60 Criminal Justice and Public Order Act “gives police the right to search people in a defined area during a specific time period when they believe, with good reason, that serious violence will take place.”

London Mayor Sadiq Khan today explained his decision to board up monuments in Westminster, including Winston Churchill’s, and said violence from far-right groups was a possibility.

“We have intelligence that extreme far-right groups are coming to London, they say to protect the statues but we think these statues could become a flashpoint for violence,” Khan told Radio 4.

He said he was worried about “far-right groups getting involved in violence, vandalism and disorder with those protesting as part of the BLM movement.”

He asked people to stay away from central London.

Met police have also imposed a 5pm (1600GMT) curfew on the demonstrations. They warned that officers are ready to make arrests if groups do not disperse after that time.