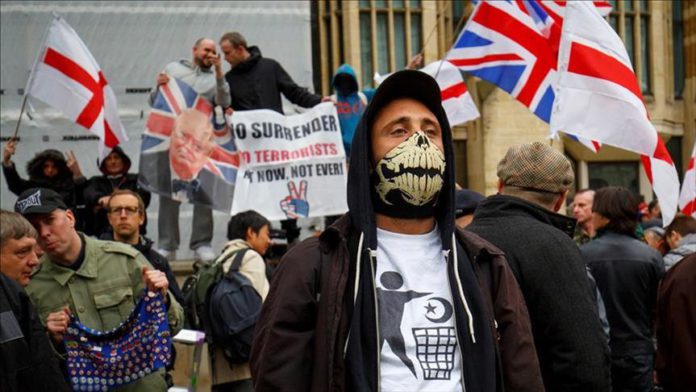 British far-right has become more openly racist and “much more extreme ideologically,” according to a new report.

The report by Hope Not Hate — an anti-fascism campaign group — said years of dominance by fascist figures such as Tommy Robinson focused on Muslims to cause the rising white nationalism in the country.

The report, which is still to be released but seen by The Independent, found that the growth of the new Patriotic Alternative group, which openly calls for non-whites to be ejected from the UK, suggests a “shift towards more openly racial politics”.

The UK’s far-right activists are becoming “much more extreme ideologically,” the author of the report, Simon Murdoch, was quoted as saying by the British daily.

He said the shifting attitudes were fuelled by the Black Lives Matter protests (BLM), which were sparked by the murder of George Floyd by a police officer in the US, and increasing the Channel crossings of migrants to the UK from France.

“There is more willingness to discuss race generally across the far right now,” Murdoch said.

Rumors that BLM protesters would attack a statue of Winston Churchill in Parliament Square, after the toppling of the statue of 17th century slave trader Edward Colston in Bristol, caused thousands of far-right members of various groups to come to London to “defend” the statues.

The Football Lads Association, English Defence League (EDL) and Britain First were among the fascist groups which organized the counter-protest.

They attacked police, journalists and BLM protesters in the Parliament Square, White Hall and Trafalgar Square, made Nazi salutes and shouted racist slogans, most of which were caught on camera.

Murdoch said that dominant groups and activists in the British far right, such as former leader of the EDL, Tommy Robinson, whose real name is Stephen Christopher Yaxley, had focused on Islam in recent years and left overt racism to the “extreme fascists” like banned terrorist group National Action.

The report also argues that the rise of the Europe-wide Identitarian movement and spread of a conspiracy theory, which claims that white people across the continent are being placed by non-whites, have contributed to extreme far-right in the UK.

“There’s this move from people previously focused on other topics like Islam, and alongside that is a contingent of the young British far right who have been embracing more extreme and traditionally fascist, white nationalist and anti-semitic ideas,” Murdoch said.

It claims that “native British” people are being eradicated and seeks extreme measures to protect “the indigenous peoples of the United Kingdom”, including a “complete halt to immigration” and paying immigrants to “return to their ancestral homelands.”

The group has so far attracted thousands of fascists from across the UK.

Murdoch said the group had attracted support from figures previously active in neo-Nazi groups, but also those with backgrounds in “more moderate” movements.

He also warned that Patriotic Alternative was “trying to give the friendliest possible face to extremely fascist ideas” by using veiled terminology.