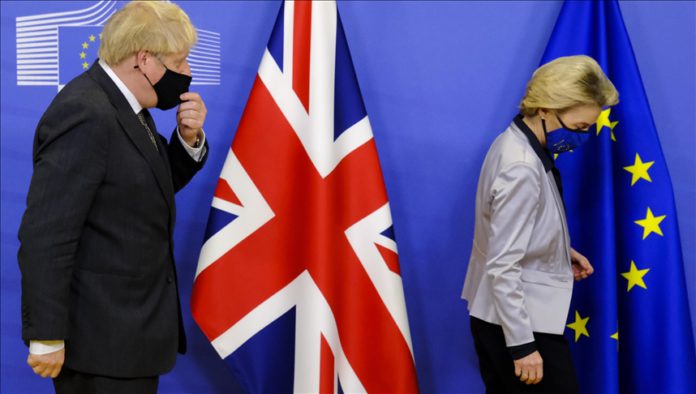 British Prime Minister Boris Johnson and European Commission President Ursula von der Leyen have agreed to continue negotiations on a post-Brexit trade deal until Sunday, according to a statement from Downing Street.

“We had a lively & interesting discussion on the state of play on outstanding issues,” Von der Leyen said in a statement posted on her Twitter account.

We had a lively & interesting discussion on the state of play on outstanding issues.

We understand each other’s positions. They remain far apart.

The teams should immediately reconvene to try to resolve these issues. We will come to a decision by the end of the weekend. pic.twitter.com/jG0Mfg35YX

“We understand each other’s positions. They remain far apart,” she noted.

“The teams should immediately reconvene to try to resolve these issues. We will come to a decision by the end of the weekend.”

The statements follow a dinner meeting between the two leaders in Brussels on Wednesday evening, which was seen as a last-ditch effort to secure a deal.

“A frank discussion” was held about the “significant obstacles” that remain in the negotiations, according to local media reports quoting a senior source from Downing Street.

“It is still unclear whether these can be bridged,” said the source.

Johnson and Von der Leyen have agreed to further discussions over the coming days between their negotiating teams, and the prime minister “does not want to leave any route to a possible deal untested.”

Johnson said Wednesday before his departure to Brussels that some of the conditions on a post-Brexit trade deal are “unacceptable.”

Britain said Tuesday that it will drop articles of its Internal Market Bill which contradict the UK Withdrawal Agreement.

The UK left the EU at the end of January, but a transition period to allow the parties to work on a trade deal kicked in until the end of the year.

Myanmar: At least 701 killed during protests