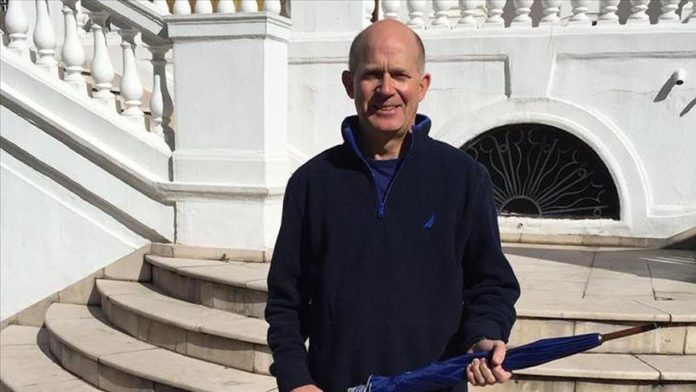 British Ambassador to Turkey on Friday said he missed traveling around the country where coronavirus measures are still in effect to beat the spread of the disease.

In an online meeting, Dominick Chilcott commented on his daily life and how he passed time in the capital Ankara, where most people prefer to stay at home unless there is a case of obligation.

“Almost all the embassy staff are working from home these days. I have an office in the residence, where my wife and I live, and during the day I work from there,” he said, adding meetings were conducted via internet.

“So although I don’t see many colleagues face-to-face these days, the majority of the embassy’s business carries on,” he said.

Keeping up the welfare and morale of their staff and family members has become a priority amid the pandemic, the British envoy said, and noted that diplomatic staff came up with new methods to socialize.

“So, for instance, using the IT, we are running quiz nights, book clubs, and even the occasional cocktail party. We have produced a COVID-19 recipe book with suggestions from our staff for dishes,” he said.

The ambassador also said that along with his wife, he recently took part in a “global marathon” to raise funds for health service and the UNICEF, adding they were being “creative in finding ways to keep up some kind of social life.”

Things he longs for

“Most of all, I miss traveling around Turkey, particularly now the good weather is here. In April, I would have gone to the Gallipoli peninsular for the annual commemorations of the First World War campaign,” he said.

The ambassador was planning to visit the coastal areas popular among British tourists ahead of the tourism as he usually did in May, however, he had to postpone his plans to a further date due to virus.

“When I’m in Istanbul and Fenerbahce are playing at home, that’s obviously the priority. I miss watching sport on the television very much and regret that the we may not see the end of the English premier league or the Six Nations rugby,” he said and noted that he enjoyed Turkish cafe life, coffee and watching the world go by.

On the things he did not really miss, the envoy said: “Listening to the occasional rather pro forma speeches at national days was never something I looked forward to with much relish. But it’s part of the job and, if that’s the worst it gets, one is really very lucky.”

The British ambassador is among those who are trying to be physically active amid the isolation as he said he exercised for half an hour on a daily basis.

He added he practiced piano at home, read books, watched TV and sometimes cooked for fun.

His family was in contact via internet but it was “frustrating” not to be able to with his grandchildren physically, he said, adding: “I am keeping my fingers crossed that we’ll all be able to go on holiday together here in Turkey in the summer,” he said.

Communication with Brits in Turkey

Chilcott said his diplomatic mission had good communications with British nationals residing in Turkey through media and social channels and this communication had become a key point since the emergence of the outbreak.

“One of our two priorities during this crisis has been to help British visitors return home,” he said, adding he personally delivered messages on social media about the return of his citizens back to the UK.

He concluded: “Our consular and public relations staff have been very busy on this. Early on in the pandemic, we invited British people in Turkey to register with us so that we could email them useful information, which we continue to do. So we use a mixture of communications methods.”

According to the latest data provided by the Health Ministry, nearly 72% of Turkish coronavirus patients have recovered, with the death toll slightly above 4,000. Turkey has conducted more than 1.5 million diagnosis tests so far.

The pandemic has killed nearly 302,500 people worldwide with over 4.44 million confirmed cases, while recoveries have surpassed 1.58 million, according to the US-based Johns Hopkins University.