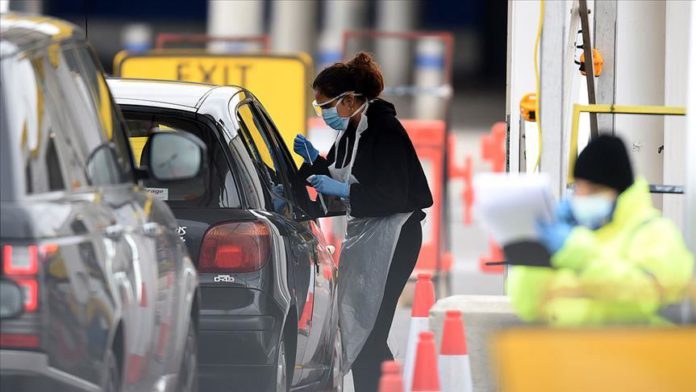 British authorities announced on Monday that the total number of UK-wide deaths from coronavirus was 28,734, a rise of 288 in 24 hours, the lowest daily increase since the end of March.

At a daily press conference, Health Secretary Matt Hancock said a new National Health Service contact tracing app will get test runs this week on the Isle of Man.

He encouraged locals to sign up and give feedback.

At a separate Downing Street press briefing earlier in the day, the prime minister’s spokesman said that the NHS Nightingale, an emergency hospital set up in London, would be put “on standby.”

The Nightingale has a 4,000-bed capacity, and is not expected to admit any new patients in the near future, but would still be ready to receive patients if need be. It is one of five such emergency hospitals set up in England.

“We view the fact that the Nightingales have not had to be used in a significant way as something that is positive,” the spokesman said, adding that they were “absolutely not” a waste of money.

Earlier in the day, Scotland’s First Minister Nicola Sturgeon strongly suggested the lockdown would continue after Thursday, telling reporters it is “very likely that on Thursday I will be asking you to stick with lockdown for a bit longer.”

The prime minister’s spokesman did not comment directly on her remarks, saying instead: “I don’t think I can pre-empt the review. But if we do ease the social distancing measures in any way, it is likely to be a gradual process.”

The spokesman added: “The British public have sacrificed an enormous amount to fight this virus, to protect the NHS, and to save lives. We are at a critical point and the worst thing that we could do is lift the measures too soon and risk a second peak which overwhelms the NHS.”

British scientists are also testing a new drug, SNG-001, they believe could help those with underlying respiratory conditions – one of the most at risk groups in the coronavirus outbreak.

Tom Wilkinson, who is leading the drug trial, told the BBC: “In an ideal world we would see a significant improvement in the health of the patients receiving the drug, a reduction in those requiring intensive care and ventilation.

“But it is early days to understand that and we will know more when we have the results.”

Results are expected by the end of June.

More than 3.53 million cases have been reported worldwide, with the death toll exceeding 248,000, according to data compiled by the US-based Johns Hopkins University. Over 1.13 million people have recovered.