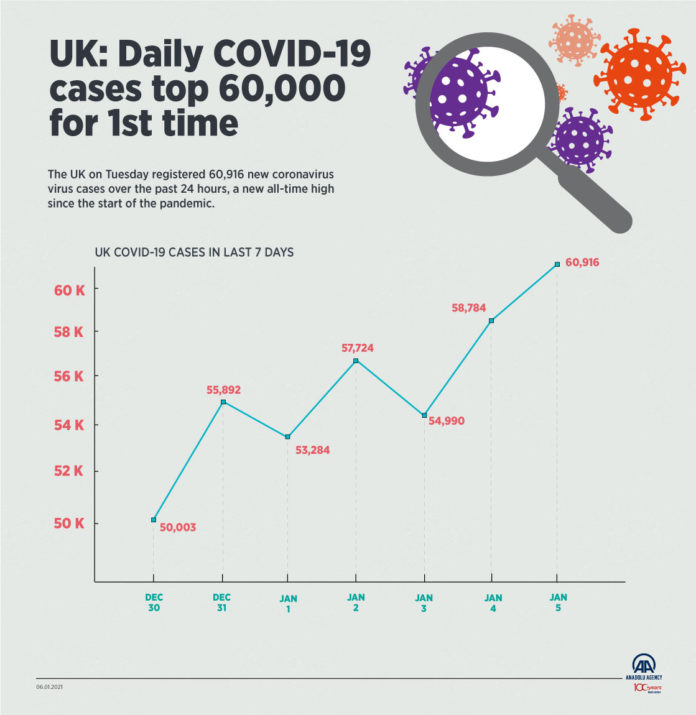 British lawmakers on Wednesday are debating the national lockdown for England, which is to run until mid-February.

The MPs are expected to overwhelmingly vote in favor of the latest lockdown later in the House of Commons, as the situation in the country has spiraled out of control with more than 60,000 new COVID-19 cases in a record single-day rise on Tuesday.

The number of those contracting the virus across the UK has reached 391,615 within a week with a worrying rise of 43.7%, according to latest official data.

Prime Minister Boris Johnson defended the government’s decision to launch new restrictive measures in England, saying: “We have no choice but return to a national lockdown.”

Johnson said there is a “fundamental difference” between the new lockdown and previous ones because “there is now a mechanism for getting out of it,” the vaccination program.

Johnson also said the National Health Service (NHS) is committed to offering a vaccination to everyone in the top four priority groups: People who live and work in care homes, frontline health and social care workers, people aged above 70 and those classified as clinically vulnerable.

New measures due to new variant

Johnson said the new measures were necessitated because of the new variant, which spreads 70% faster.

He said: “The tiers agreed by this House last month were working with the old variant.

“But, alas, this mutation spreading with frightening ease and speed in spite of the sterling work of the British public – has led to more cases than we have ever seen before, alas numbers that cannot be explained away by the meteoric rise in testing.”

He also told the lawmakers that “the restrictions will be kept under continuous review with a statutory requirement to review every two weeks and a legal obligation to remove them if they are no longer deemed necessary to limit the transmission of the virus.”

Calling the situation in the UK very serious, opposition Labour leader Keir Starmer said “tougher restrictions are necessary” and they would support those measures.

However, Starmer also criticized the government for acting too slow against the pandemic despite reports about the risks of second wave and mutation.

The death toll in the country stands at 76,305, according to official figures. It is currently the highest death toll across Europe.

2 civilians, as many policemen killed in Indian-administered Kashmir