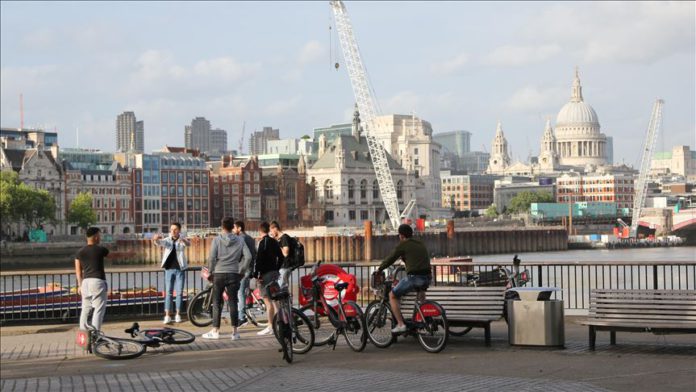 The UK’s coronavirus death toll passed 40,000 on Friday, as its rate of infection (R number) rose over 1 in some parts of the country and local media reported that Britain has the second-highest coronavirus rate among major European countries.

“As of 5 pm on 4 June, of those tested positive for coronavirus, across all settings, 40,261 have sadly died.”

The British government had originally said a death toll of 20,000 would be a “good result.”

The Manchester Evening News reported that the R (disease reproduction) number in northwestern England is now above 1, the highest rate across England. An R value over 1 means the disease can spread rapidly throughout the population again.

The numbers came from scientists at Public Health England and Cambridge University.

The rise will provoke further debate over the speed at which the government is lifting the lockdown.

There is evidence the R number “has risen in all regions and we believe that this is probably due to increasing mobility and mixing between households and in public and workplace settings,” the analysis said.

It added that this “will lead to a slowdown in the decrease in new infections and deaths.

“There is evidence, from the forecast of deaths for the whole of England, that the increases in the regional reproductive numbers may result in the decline in the national death rate being arrested by mid-June.”

The Manchester paper quoted Greater Manchester Mayor Andy Burnham as saying: “It’s very worrying. It appears, I would say, that lockdown has been relaxed too early, given the fact that ‘track, test and trace’ is some way from being up and running.

“I think it begs the question as to whether the advice is right to people in the northwest.”

Sky News reported that, according to their analysis, the UK had the second-highest coronavirus infection rate among major European countries that implemented a lockdown.

Britain was beat to first place by Sweden – which did not impose a full lockdown at all.

“In the UK and Sweden, the number of daily confirmed cases remains high and the shape of their epidemic is diverging from those of Spain, France and Italy,” Sky News said.

Researchers at Oxford University said the UK’s lockdown was less stringent than other hard-hit countries, such as Spain, Italy, and Belgium, Sky News said, adding that population density was also a factor.

Some 6.7 million cases have been reported in 188 countries and regions since the virus emerged in China last December.

The pandemic has claimed over 392,000 lives worldwide, while recoveries are nearly 2.9 million, according to figures compiled by the US’ Johns Hopkins University.