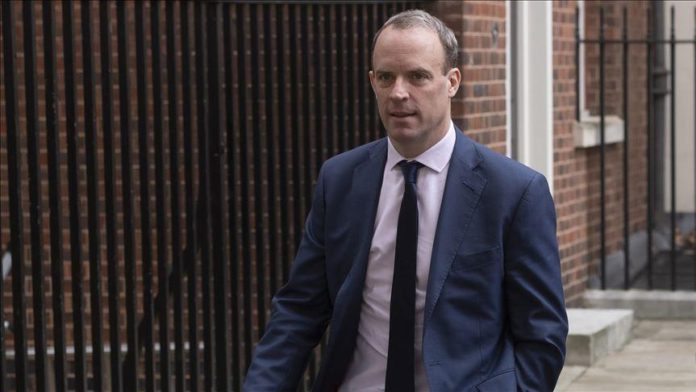 Britain on Tuesday called for the “immediate and unconditional release” of Russian opposition figure Alexey Navalny after he was sentenced to over three years in jail.

“Today’s perverse ruling, targeting the victim of a poisoning rather than those responsible, shows Russia is failing to meet the most basic commitments expected of any responsible member of the international community,” Foreign Secretary Dominic Raab said in a statement.

He also demanded to set free “all of the peaceful protesters and journalists arrested over the last two weeks.”

A Moscow court has sentenced Navalny to two years and eight months in prison on charges of violating parole. His lawyers have announced they would appeal the verdict.

Navalny, 44, who received treatment in Germany after allegedly being poisoned last year, was arrested in the Russian capital upon his return on Jan. 17.

Russian authorities said he had violated probation terms of a suspended 2014 sentence for fraud and embezzlement.

His arrest sparked mass protests throughout Russia, and according to rights activists, over 5,000 people were detained on Jan. 31.

Less than 25 hours after his return, Moscow’s Khimki Court ruled that Navalny would remain in custody on a 30-day pre-trial detention.

London-Moscow relations have been strained after Russia’s annexation of Crimea in 2014 and, especially, since the March 2018 alleged poisoning and near death of former Russian spy Sergei Skripal and his daughter on UK soil.

Over 170 kg of marijuana seized in northwestern Turkey