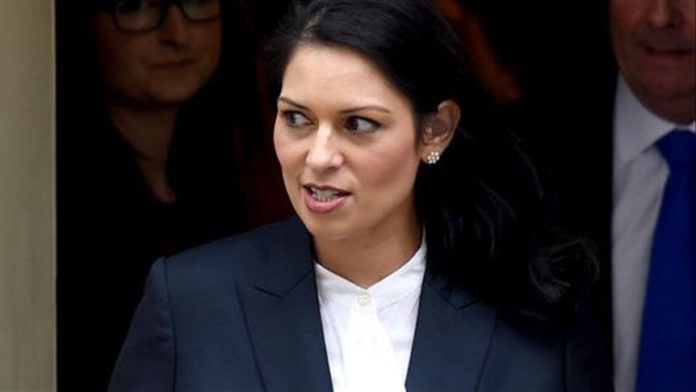 British Home Secretary Priti Patel on Monday issued a ban of The Base, an extreme right-wing terrorist group.

The Base, which is predominantly based in the US, is a militant white supremacist organization that seeks to establish a white ethno-state.

The group promotes the use of violence to establish a fascist, white ethno-state through a “race war,” and its members have been known to engage in weapons and explosives training, a statement by the UK government said.

In the statement, Patel said: “We continue to take robust action against evil white supremacist groups, who target vulnerable people across the world to join in their hateful ideologies and their sick promotion of violence.

“I am committed to making it as difficult as possible for these organisations to operate in the UK, both by banning them and increasing the penalties for membership or support, in order to protect the public and our national security.”

The Base is the fifth right-wing terror group to be proscribed in the UK, and the third within the last year.

In January 2020, alleged members of the group were arrested in the US, after being under FBI surveillance for months.

According to the Southern Poverty Law Center (SPLC), The Base “is an antisemitic, white nationalist network that trains members in survivalism and paramilitary skills to prepare them to mount an armed resistance against the government.”

The SPLC is a nonprofit legal advocacy organization specializing in civil rights and racial justice.

In their profile on the terror group, the SPLC said The Base does not seek to build popular appeal, but instead have a revolutionary outlook and act on it “either by forming small, clandestine terror cells or inspiring individuals to carry out ‘lone actor’ attacks.”

The SPLC added that although the group is largely organized online, The Base’s members meet in person “to train with assault weapons and practice survivalist skills to prepare for the race war they believe is imminent.”