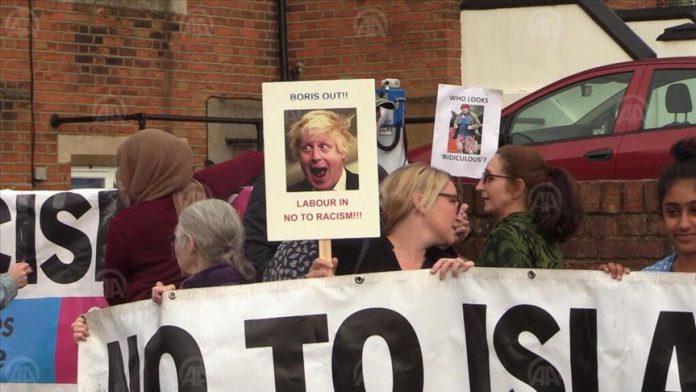 Allegations of Islamophobia within Britain’s leading Conservative Party reached a new high Tuesday after 25 current and former party councilors were identified as having posted anti-Muslim and racist remarks on social media.

An exclusive story by the Guardian daily suggested that 15 sitting and 10 former councilors sent messages on Facebook and Twitter to the party’s headquarters.

The messages in a dossier obtained by the daily include “calls for mosques to be banned, claims the faith wants to “turn the world Muslim” and refer to its followers as “barbarians” and “the enemy within.”

Prime Minister Boris Johnson came under intense pressure to launch an independent investigation into the matter after the latest hate messages surfaced.

The dossier, compiled by an anonymous Twitter user, was sent to the Guardian and forwarded to the Conservative Party. The party suspended all those who are still members pending an investigation, the daily reported.

Sayeeda Warsi, a Conservative member of the House of Lords, said she was “appalled” by some of the comments in the dossier.

“These further divisive and racist comments by elected Conservative councilors are a further indication of the issue of Islamophobia in the party,” she said.

“The constant argument made by the party [is] that there isn’t the evidence, yet dossier after dossier has been presented to the party. Now this one exposes a sizeable number of sitting Conservative councilors. These individuals seek to represent the party, and if the party truly believes in rooting out racism, it should start from rooting out those with racist views from the party.

“Sadly, the party has been trying to downgrade, dilute and deflect the issue of Islamophobia.”

Warsi has repeatedly urged the party to launch an investigation into Islamophobia within the Conservative Party.

The development came a day after the Muslim Council of Britain (MCB) accused the Conservative leadership of “denial, deflection and discounting” after the party announced it would be holding a broader investigation into “all types of prejudice,” backpedaling on a previous pledge for an independent investigation into the matter.

The MCB said in a statement on the latest development that Islamophobia in the Conservative Party is “endemic.”

“From members at the grassroots, councilors, MPs, members of the Cabinet and the Prime Minister, there are hugely concerning levels of hatred against Muslims throughout the party,” MCB Secretary General Harun Khan said in a statement.

The biggest Muslim umbrella group in Britain also said the “lack of transparency and attempt to cover up the problem only heightens the mistrust of the Party.”