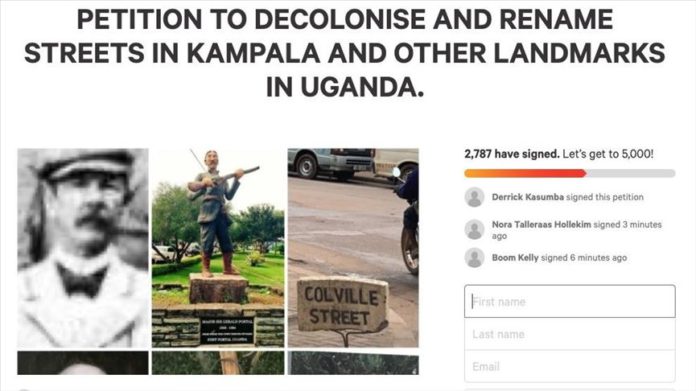 Thousands of Ugandans have signed an online petition that was launched to rename streets and other public facilities in their country, which are named after British colonialists.

More than 2,500 people have signed the petition that was launched on Tuesday.

“We believe that the removal of visible vestiges of a colonial hegemony from public spaces is a crucial part of a process of decolonisation and ending an era of domination and impunity,” according to the petition.

“Events following the ugly killing of George Floyd in the USA demonstrate the urgency to address all forms of injustice and discrimination everywhere.

“It is time for us to come to terms with our history acknowledging the crimes committed while celebrating the heroes and heroines who represent and promote the values of freedom, dignity, peace and justice,” it added.

In 1893 the Imperial British East Africa Company transferred its administration rights of territory consisting mainly of Buganda Kingdom to the British Government.

The petition came after a statue of Belgian King Leopold II was removed from a public square in the city of Antwerp, Belgium on Tuesday.

Red paint was poured on another statue of Leopold on the outskirts of Brussels in an act likely inspired by the Black Lives Matter protest, while 63,000 people signed an online petition over a week calling for the removal of all his monuments.

There are several colonial monuments and symbols in each African country.

Cameroonian activist Andre Blaise Essama has been jailed several times for destroying colonial statues and other objects in the Central African country.