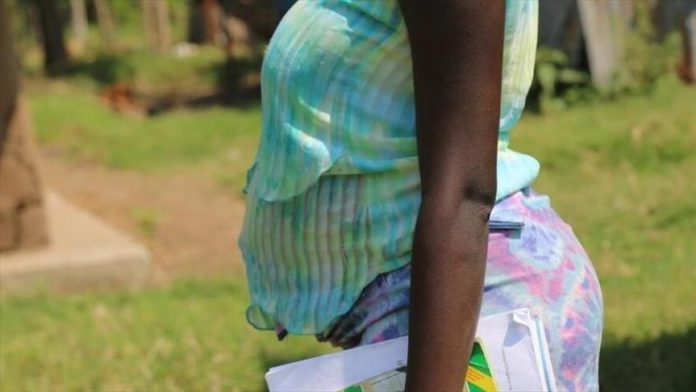 A 14-year-old mother in her school uniform was breastfeeding her 4-month-old in a small room at Nabidde Primary School in eastern Uganda.

According to government directives, all schools must provide a dedicated space for teenage mothers and pregnant students, as official data shows that over 650,000 teenage schoolgirls have given birth during their two-year absence from schools due to COVID-19 restrictions.

During the 2021 lockdown, over 32,000 teenage pregnancies were registered on average per month in Uganda, according to UN Population Fund research. The data includes underage marriages, which are prohibited by law, as well as rape victims.

Two primary students are mothers, and three are expecting, according to Yona Kakaire, the headmaster of Nabidde. A small room off the staff room is provided for breastfeeding at any time, and pregnant students are encouraged to use it if they feel tired.

Face-to-face education restarted in the country on Jan. 10, but despite the government’s encouragement, some students who became mothers during the two-year hiatus are refusing to return.

When all schools reopened, President Yoweri Museveni ordered that the girls’ schools designate a special room. The government, he said, encourages adolescent mothers to pursue their education.

One of the teenage mothers, Justine, chose to complete her primary education at Nabidde Primary School. (We have changed her name to protect her privacy.)

Speaking to Anadolu Agency, she said: “A part-time worker at our next-door neighbor’s house got me pregnant. He enticed me with 10,000 shillings (about $2.6) and then impregnated me. He fled the village after realizing that he had made me pregnant.”

She returned to her classroom after breastfeeding her baby.

According to the headmaster, the girl’s home is close to the school. Her baby is usually left at home with her mother and younger sibling. When the baby needs to be breastfed, the sister takes her to the school’s designated room, Kakaire added.

Some shy about returning to class

Reports from across the country say many schools face a similar predicament. Children in rural areas are the most affected because, unlike in cities, they can freely travel from one location to another.

Herbert Ntende, the headmaster of Kigge Primary School in the eastern Kamuli district, met with parents of students who became pregnant during the lockdown.

After the meeting, he informed Anadolu Agency that the school has nine pregnant students and four mothers, two of whom have twins and have not returned to school.

The other girl students were adamant that they would not return. However, he added, a local NGO is encouraging pregnant students to return to school.

He said the school has also assigned a senior woman teacher who is always available to help the girls if they have any problems or complications before going to their classes, and that these students are helped to be psychologically prepared through counseling before receiving face-to-face education.

They also teach other students at the school how to treat pregnant classmates and not to offend them, he added.

Christopher Bakaki, an Education Ministry official, said: “It is unfortunate that many teenage girls got pregnant. We have advised headteachers to ensure that the teenage mothers get adequate guidance and counseling.”

The minister of state for higher education, Crystom Muyingo, said in an interview with local media: “There is a need to give such girls a second chance. The fact that they got pregnant does not mean that they stop going to school.”​​​​​​​​​​​​​​