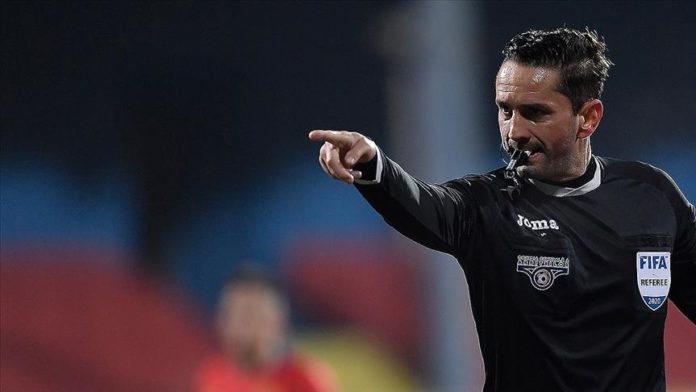 UEFA on Monday banned a Romanian football referee until the end of the current season for “inappropriate behavior” in a match last December between a Turkish team and a French one.

In February, the European football body launched proceedings against Sebastian Coltescu after Turkish side Basaksehir claimed he used a racial slur to identify Pierre Achille Webo, their assistant manager, a Cameroonian.

In its decision, the UEFA Control, Ethics and Disciplinary Body (CEDB) suspended “Coltescu from carrying out any referee’s function until the end of the 2020/21 season, i.e., until 30 June 2021,” for violating Article 11 rules against “inappropriate behavior during a UEFA match.”

The body added that it reprimanded Octavian Sovre, another referee at the match, for inappropriate behavior and ordered both Coltescu and Sovre to take part in a UEFA-chosen educational program before June 30.

It said both officials violated ethical conduct codes, but not Article 14, which governs racism and other discriminatory conduct.

The UEFA also suspended Webo from one UEFA competition “for unsporting conduct” during the Dec. 8 match.

Webo was shown a red card before the incidents.

The UEFA Champions League match on Dec. 8 between Paris Saint-Germain and Basaksehir in Paris was paused after Basaksehir headed to the locker room for alleged racist remarks of Coltescu towards Webo.
Before the rescheduled match, held the next day with new officials, referees and players knelt down on the pitch to protest racism.