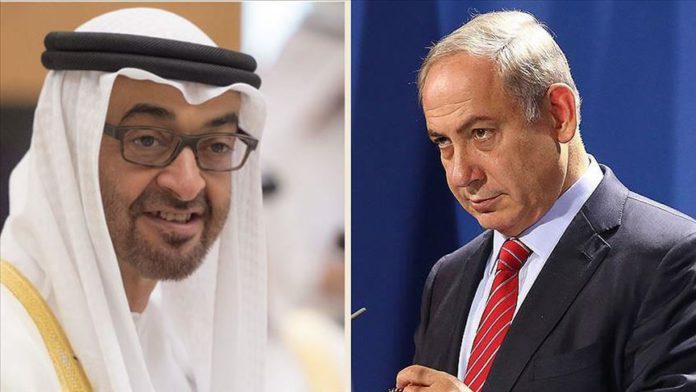 The Crown Prince of Abu Dhabi, Sheikh Mohammed bin Zayed, received a phone call Monday from the Israeli prime minister, their first contact since the United Arab Emirates (UAE) and Israel announced a deal in August to normalize their relations.

“During a phone call with Israeli Prime Minister Benjamin Netanyahu, we discussed strengthening bilateral ties and examined prospects for peace and the need for stability, cooperation and development in the region,” bin Zayed tweeted.

The Israeli Walla news website, citing Netanyahu’s office, said the Israeli premier agreed with bin Zayed to “meet soon,” without specifying the location or date of the meeting.

According to the broadcaster, the Israeli government approved on Monday a US-sponsored agreement to normalize relations between Israel and the UAE, which will be ratified by the Israeli Knesset (Parliament) on Thursday.

A high-level Emirati delegation will arrive in Israel next week, the website said.

Earlier on Monday, the first Emirati ship loaded with goods, including iron, firefighting, cleaning and electronic equipment, arrived at Haifa Port in Israel, according to the official Israeli Broadcasting Corporation.

The “Israel in Arabic” website, which is affiliated with the Israeli Foreign Ministry, commented on the development saying: “Thus, the first commercial maritime line between the United Arab Emirates and the State of Israel was opened.”

The UAE and Israel agreed to establish full diplomatic, cultural, and commercial relations following the signing of their normalization agreement at the White House last month.

The move was followed by a series of announcements on agreements and contracts between companies from both nations.

Turkey to host twice as many tourists in 2021: Official