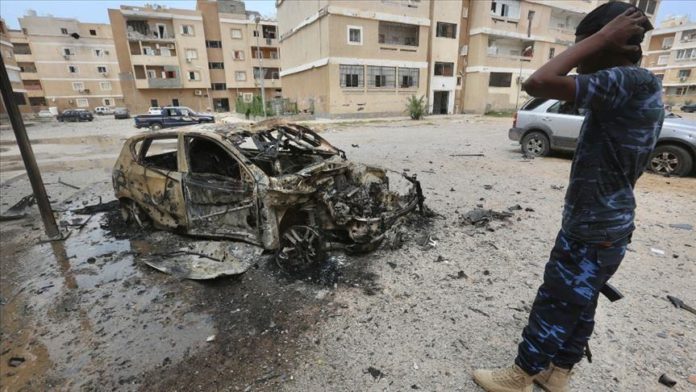 According to confidential letters by a Panel of Experts, under the Security Council’s Libya Sanctions Committee, the sale of at least $18 million in military equipment was made through a Jordan-based company that was founded by Fulcrum Holding in the UAE.

A source familiar with the letters, who spoke on condition of anonymity, said the committee got a tip-in mid-January that the UAE was trying to fund a special team of mercenaries to back Haftar, the leader of illegal armed forces in eastern Libya, in Benghazi.

The Fulcrum Holding set up the company allegedly to carry “geographical researches” and used it to purchase three Puma helicopters from South Africa.

The helicopters were transported to Jordan and then to Libya.

The source said it was unclear if South Africa’s Starlite Aviation company sold the helicopters or mediated the transportation process.

The UAE-based company also purchased three French-built SA 341 attack helicopters from Gabon to deploy to Libya and two 20-person MRC1250 boats via Malta-based Sovereign Charterers for the mercenaries to use.

The source said the letter revealed 20-25 mercenaries went to Benghazi to receive the helicopters and boats, and the purchase of six helicopters and two boats were actually made to carry out raids on vessels off Libya, pull them to the coast and search them for military equipment.

Against the risk of being noticed by satellite, the source said a logo of the Jordan-based company was embroidered on the helicopters and boats to give the impression they were doing “geographical researches.”

Anadolu Agency contacted the UAE Permanent Mission to the UN but has yet to receive a response.

Since April 2019, the government has been under attack by warlord Khalifa Haftar’s forces, based in eastern Libya, and more than 1,000 people have been killed in the violence.

UN Security Council imposed an arms embargo on Libya in 2011.