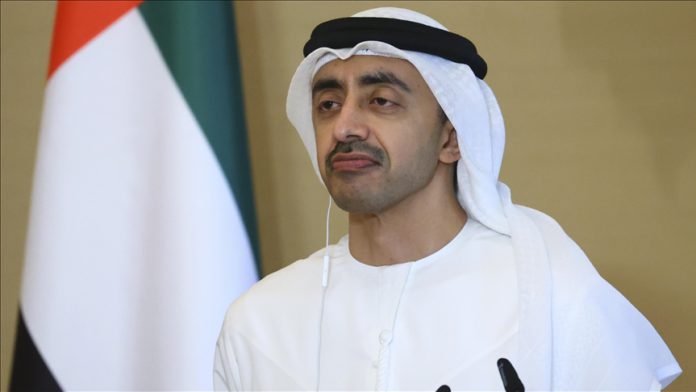 Emirati Foreign Minister Abdullah bin Zayed said Wednesday he was disappointed by the US administration for failing to use the term “Abraham Accords” to refer to the normalization deal between the United Arab Emirates (UAE) and Israel.

In an interview with the Israeli Walla News portal in Abu Dhabi, bin Zayed said the Americans are not against the UAE-Israel normalization deal.

US media reports earlier said that the State Department has discouraged officials and employees from referring to the normalization deals as the “Abraham Accords”. However, US Secretary of State Antony Blinken used the “Abraham Accords” term on Sunday during his meeting with Israeli Foreign Minister Yair Lapid.

The former administration of Donald Trump called the normalization deals signed in September between the UAE, Bahrain, and Israel the “Abraham Accords”.

Bin Zayed said he believes in the ability to enhance relations between the UAE and Israel, stressing that the challenge remains on how to include the Palestinian Authority and the Palestinians in the normalization process.

He called on the Israeli authorities to address the humanitarian situation in the Gaza Strip and to avoid any reckless moves in Jerusalem.

Early on Wednesday, Lapid inaugurated an Israeli consulate in Dubai, one day after opening his country’s embassy in Abu Dhabi.

The Palestinians have decried the normalization deals with Israel as a “betrayal” of their cause.

Coronavirus in Kuwait: Cases rise to 80