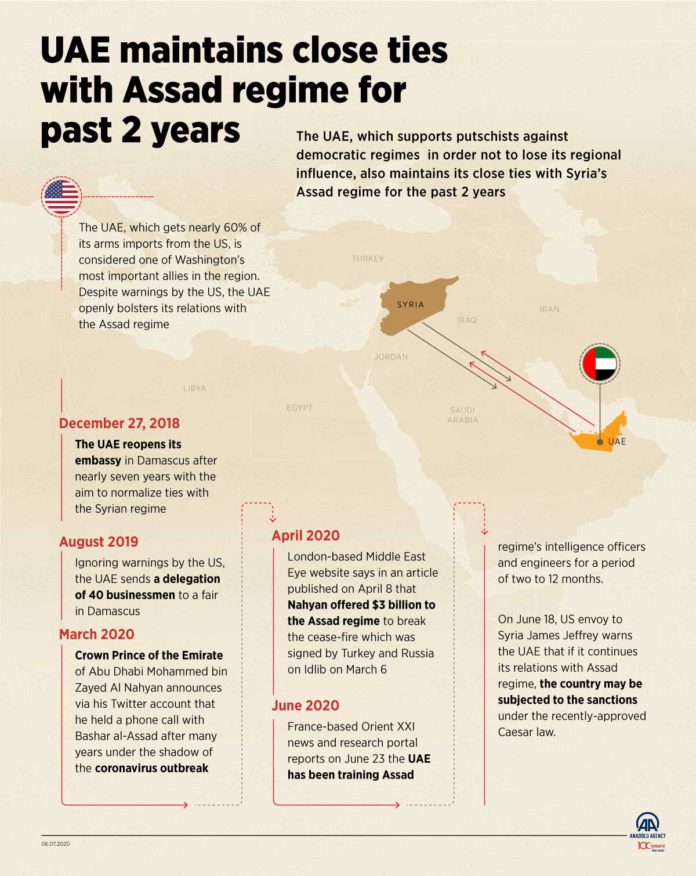 The United Arab Emirates, which supports putschists against democratic regimes for the sake of not losing its regional influence, has been cooperating with Syria’s Bashar al-Assad regime for the last two years.

After the UAE cut all diplomatic ties with the Assad regime in 2011 following the Arab Spring, Russia’s pro-Assad intervention prompted the UAE to revise its policy towards Syria despite supporting the opposition there for a while.

Instead of taking a stance against the Assad regime, which has caused the deaths of hundreds of thousands of civilians, the Abu Dhabi administration chose to take side with it.

The following is a compilation of developments in diplomatic, commercial, and military relations between Abu Dhabi and the Assad regime, especially in the past two years.

The first sign of the change in Abu Dhabi’s position towards the Assad regime was UAE Foreign Minister Anwar Gargash’s cautious support of Russia’s military intervention in November 2015.

In April 2018, Gargash claimed in a statement that the civil war in Syria was between Assad and “radical Islamic” groups.

He complained about the exclusion of Syria from the Arab League, highlighting his country’s softening attitude towards the Assad regime

Reopening of UAE Embassy in Damascus

On Dec. 27, 2018, the Abu Dhabi administration reopened its embassy in Damascus, which had remained closed for nearly seven years.

According to the UAE’s official news agency, WAM, with the reopening of its embassy, the UAE aims to normalize relations with Syria and help eliminate risk of regional intervention on issues between the Arab world and Syria.

The reopening “is the fruit of the conviction that the next phase requires Arab presence and communication with Syria for the care of its people, sovereignty and territorial integrity,” Gargash said on Twitter.

The UAE’s Charge d’Affairs in Damascus Abdul Hakim Ibrahim Al-Nuaimi in a speech at a reception in Damascus for the 48th anniversary of the independence of his country on Dec. 2, 2019, openly praised the Assad regime.

Pointing to the change in his country’s policy towards the Assad regime, Naimi said there are strong, solid, and privileged relations between Syria and the UAE.

He also said the Assad regime has a smart administration.

The UAE, which receives nearly 60% of its arms imports from the US, is considered one of Washington’s most important allies in the region. However, despite US warnings, the UAE did not hesitate to send a delegation of 40 businessmen to a fair in Damascus in August 2019.

Before the fair, the US Embassy in Syria warned that according to their reports, some businessmen and chambers of commerce in the region will participate in the fair and that all parties doing business with the Assad regime will be on a US sanctions list.

But no US sanctions have been imposed on the UAE delegation that attended the fair.

The UAE wants to keep its commercial relations strong and resume its tourism and real estate investments as it had before 2011 through the businessmen it sends to Damascus.

UAE offers $3B to Assad to break Idlib cease-fire

The London-based Middle East Eye (MEE) website, in an article published on April 8, said UAE Crown Prince Mohammed bin Zayed Al Nahyan offered $3 billion to the Assad regime for breaking the cease-fire which was signed between Turkey and Russia for Idlib on March 6.

According to MEE sources in the article, senior officials went to Damascus to talk over the offer with Assad, and $250 million was given as a prepayment.

However, the UAE’s plan has failed due to Moscow and Ankara’s firm stance on the cease-fire.

On March 27, Al-Nahyan said on Twitter he had a phone call with Assad under the shadow of the pandemic after many years.

“I discussed with Syrian President Bashar al-Assad updates on COVID-19. I assured him of the support of the UAE and its willingness to help the Syrian people. Humanitarian solidarity during trying times supersedes all matters, and Syria and her people will not stand alone,” he said.

The UAE has also been providing military support to Damascus after the resumption of diplomatic relations with the Assad regime, according to a research paper on June 23 by France-based research and news portal Orient XXI — titled How does Abu Dhabi help Damascus?

It points out that the UAE has provided training to regime intelligence officers since Jan. 15 ranging from two months to a year.

In addition to the training by UAE intelligence officers, 31 UAE soldiers and eight civil information and communication system engineers have provided training on logistics, it said.

The paper also noted the UAE has been providing medical support and food aid to hospitals belonging to the Assad regime since 2018.

In the autumn of 2017, a delegation from Abu Dhabi visited regime-controlled areas in Syria and offered reconstruction assistance, the paper said.

In July 2016, the US Treasury Department announced that a company from the UAE and its owner were blacklisted for violating an arms embargo imposed on the Assad regime.

The ministry said the company, called Yona Star, which has offices in Dubai and Damascus, operates as a transportation agency for the Assad regime’s Air Force, the Scientific Studies and Research Center, the Syrian Air Force Intelligence, and the Army Supply Bureau.

It is claimed that the UAE company is also trying to supply tires for aircraft belonging to the Assad regime.

On June 18, US envoy to Syria James Jeffrey warned the UAE that if it continues its efforts to normalize relations with the Assad regime, it may be subjected to sanctions under the newly approved “Caesar Law” in the US Congress.

Jeffrey said he knew that the UAE strongly opposed attempts by the US to open an embassy in Damascus and normalizing its relations with the Assad regime.

“They’re sovereign countries; they can make these decisions. But we have made it clear that we think this is a bad idea. It is not going to be conducive to a carrying out of the UN Security Council resolution and the ending of a conflict that is very troubling for the entire region,” said Jeffrey.

Regarding UAE citizens or companies doing business with the Assad regime, Jeffrey said: “In terms of economic activities that either somebody in the UAE or somebody in another country does that meets the criteria of these sanctions or legislation, they are a potential sanctions target.”