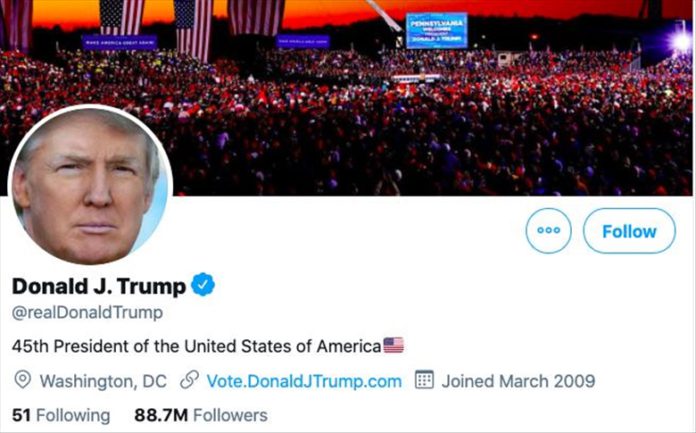 Twitter on Wednesday locked US President Donald Trump’s account for at least 12 hours over his inflammatory rhetoric, warning that future violations of its rules could lead to his account being permanently suspended.

“As a result of the unprecedented and ongoing violent situation in Washington, D.C., we have required the removal of three @realDonaldTrump Tweets that were posted earlier today for repeated and severe violations of our Civic Integrity policy,” the social media company said on its platform.

“This means that the account of @realDonaldTrump will be locked for 12 hours following the removal of these Tweets. If the Tweets are not removed, the account will remain locked,” it added.

It said future violations of its rules “will result in permanent suspension of the @realDonaldTrump account.”

In one of the tweets, Trump attached a video message, repeating his false claims that the presidential election “was stolen from us” and urged his supporters to go home. In a second tweet, Trump defended what the supporters did earlier in the day as the capital was marred by violence.

“This tweet is no longer available,” the company said on all three posts.

Trump and his political allies have for months falsely alleged that the election he lost to his Democratic rival Joe Biden by 7 million votes was rigged, stirring emotions among his supporters with conspiracy theories that have been repeatedly rejected in court. The Justice Department also found no evidence to support his claims of widespread voter fraud.

The Capitol was overrun earlier in the day for the first time since the British burned it to the ground in 1814. Lawmakers were set to convene a joint session of Congress that is traditionally a routine affair of Electoral College vote counting ahead of Biden’s Inauguration Day on Jan. 20.

One person who was shot during the melee has died, DC police confirmed during a telephone call with Anadolu Agency.

Half of all Americans 'now fully vaccinated' against COVID-19