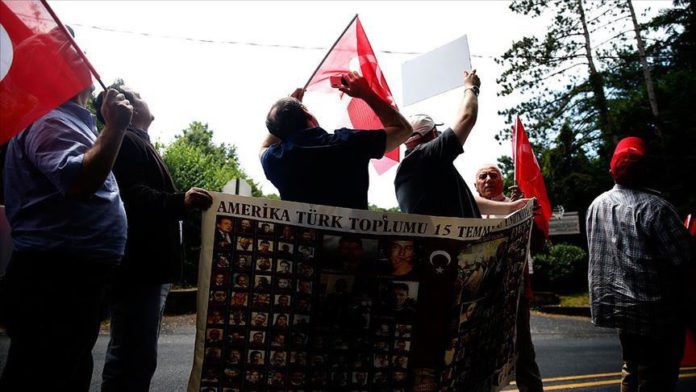 The US-based Turkish American National Steering Committee (TASC) sent Congress a letter Monday requesting the extradition of the leader of the Fetullah Terrorist Organization (FETO), the terrorist group behind the 2016 defeated coup in Turkey.

The request came as Turkey will mark the fourth anniversary Wednesday of the July 15, 2016 coup bid which left 251 people martyred and nearly 2,200 injured.

“The Gulen Cult does not represent Turkish Americans, does not stand for Islam, and does not believe in democracy,” the letter said. “Fethullah Gulen stands selfishly for his corrupt multi-million dollar network which is the subject of federal and state investigations.”

“Furthermore, we Turkish Americans distance ourselves from the Gulen Cult’s fundamentalism and anti-Semitism, which it hides under the pretense of inter-faith-dialogue as it attempts to exploit fear of Islam and penetrate American society to gain political influence,” it added.

It noted that Gulen’s members hijacked NATO assets and turned them against the people on the night of July 15 and the evidence points to Pennsylvania-based Gulen.

The letter also underlined the “remarkable similarities” between Gulen and Omar Abdel-Rahman, also known as “the Blind Sheikh,” who was convicted and sentenced to life in prison for a seditious conspiracy based on his sermons that inspired militants to bomb the World Trade Center in New York City in 1993.

Co-chaired by Gunay Evinc and Halil Mutlu, all TASC board members signed the letter.