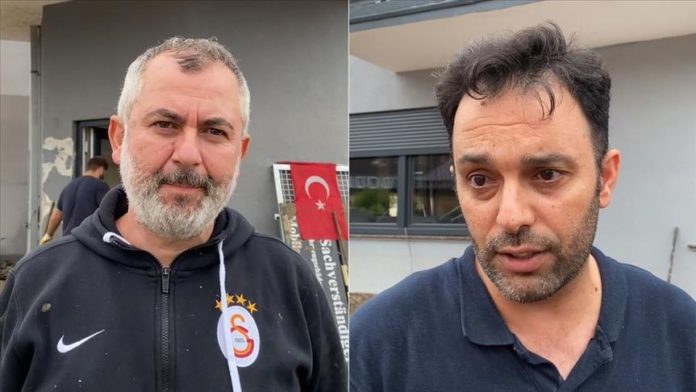 Turks affected by a deadly flood disaster in Germany recalled on Friday the harrowing moments to save lives.

Ali Sarisu, who has been living in Sinzig in Rhineland-Palatinate for five years, said he woke up late Thursday to the sound of water and looked out from his balcony.

“It was the first time I saw something like this. Everywhere was covered with water and it was not possible to go down,” said Sarisu.

“We had no choice but to pray to God,” he said as he recalled how belongings, cars and garbage cans were dragged in the water.

Orhan Er, who runs an auto repair shop and sells cars in Sinzig, said he was at home at midnight when disaster struck.

“I woke up at night at the sound of water at 2 a.m. I saw the fire brigade teams were evacuating the houses across the street,” Er told Anadolu Agency.

He said he went to find out if they would be evacuated too but could not return because of rising waters.

“Then we left the disaster area with my family. We just left without taking anything with us,” Er said.

Germany’s worst floods in 200 years have claimed more than 100 lives in western Rhineland-Palatinate and the North Rhine-Westphalia regions, according to officials.

The army has deployed 850 soldiers to assist in rescue efforts.