The Embassy of Turkmenistan in Turkey marked the 25th anniversary of the country’s neutrality, according to a statement.

In a videoconference on Tuesday with the participation of officials of the Consulate General of Turkmenistan in Istanbul, it was highlighted that 2020 was declared as a year of “Turkmenistan – Home of Neutrality.”

During the meeting, a video on the achievements of the country in various spheres over the years of Turkmenistan’s neutrality was also played.

The participants underlined that the “positive neutrality of Turkmenistan” is an international instrument for promoting peace, stability and development, as well as elaborated on the political, economic and cultural aspects of the policy.

The meeting also stressed on the role of Turkmenistan’s neutrality policy in strengthening international and regional stability and cooperation with UN and other international organizations in ensuring regional and global peace and sustainable development.

The meeting was attended by Turkmenistan’s Ambassador to Turkey Ishankuli Amanlyev, the Consul General in Istanbul Muratgeldi Seyitmammedov, the President of the Turkish Institute for Strategic Concepts Muhammet Savas Kafkasyali, the Secretary General of the Chamber of Commerce and Industry of the Organization for Economic Cooperation Adem Kula, the chief specialist of the Center for Strategic Studies of Sahipkaran Cesurhan Tas, and the diplomats of the embassy.

In July 1992, Turkmenistan declared the positive neutrality policy as part of its foreign policy at the Helsinki Summit of the Organization for Security and Cooperation in Europe. On Dec. 12, 1995, the UN General Assembly adopted the “Permanent Neutrality of Turkmenistan” resolution, unanimously by all 185 member states. 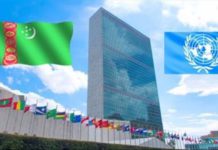